For millions of sports fans across America, this past weekend was the end of the sports season. When the Pittsburgh Steelers hoisted the Vince Lombardi Trophy after defeating the Seattle Seahawks 21-10 in Super Bowl XL, buffalo wing-eating football fans shed a tear, as their beloved sport of choice ended another season.

However, in arenas across the country, another football league was just getting started. The Arena Football League kicked off its 20th year just a few weeks ago, and the sport, which is continually gaining popularity, is making its digital debut on current-generation consoles today.

Electronic Arts announced that Arena Football has shipped to stores across the country for the Xbox and PlayStation 2. This is the first AFL-branded game to hit the market since EA acquired the exclusive rights to make games based on the league (EA also owns the game-making rights to the National Football League and NCAA Football).

The game follows the AFL's rule book, and plays on a smaller, boxed-in field than its Madden NFL counterpart. Several position players play both sides of the line of scrimmage, and sure-handed players can take control of receivers and make up their own passing routes on the fly.

Arena Football was developed by EA's Orlando-based Tiburon studio, the same hands that create the popular Madden NFL Football games. For more on the E10+-rated game with the $29.99 price tag, check back later today for GameSpot's full review. 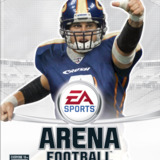