Arcadegeddon, a co-op looter shooter from Ilfonic, was announced for PS5 during the PlayStation State of Play, with early access available now.

Arcadegeddon, a co-op looter shooter, was announced during today's PlayStation State of Play. Developed by Illfonic, best known for Predator: Hunting Grounds and Friday the 13th, Arcadegeddon is a third-person shooter taking place in a colorful cyberpunk future.

Players can go solo or with three friends, shooting through enemies and collecting piles of colorful loot. The art style is more cartoonish, with big damage numbers flying out of enemies and character customization. Players can take on additional challenges from local gangs in order to gain street cred. There are nine different gangs in Gilly's Arcade, each with its own challenges and style. Completing challenges from them will unlock special abilities and skins.

Arcadegeddon is centered around Gilly's Arcade, the only remaining arcade, and Gilly's attempt to save it from being bought out by the mega-corporation, Fun Fun Co. Gilly connects all of the arcade games together in order to create a super game, but Fun Fun Co. injects it with a virus, which is where you come in. You will need to take down the virus across different biomes and game types in order to save the last hometown arcade.

In a PlayStation Blog post, head of creative and design at Illfonic Jared Gerritzen said that they plan to have Arcadegeddon in early access for seven months, during which there will be regular patches and seasonal updates before the game enters full release.

Arcadegeddon features a mix of PvP in addition to PvE game modes. Arcadegeddon is available now in early access for PS5 and PC via the Epic Games Store for $20 USD, with a full release coming in 2022. 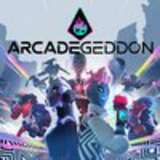