At Anime Expo 2018, Arc System Works and Studio Trigger have revealed more details about the Kill la Kill fighting game. Called Kill la Kill The Game: IF, it's a 3D fighter filled with the acclaimed anime series' trademark flashiness and over-the-top action. The team also debuted a new trailer, which shows off main characters Ryuko Matoi and Satsuki Kiryuin in detail. You can watch the trailer above.

During the panel, representatives from publisher Arc System Works, developer APLUS, and Kill la Kill anime studio Trigger all discussed what the game will be like. While the trailer shows Ryuko and Satsuki fighting one-on-one, the team hinted that the game might not adhere to that format entirely, because some of the characters fight hordes of enemies at once in the anime. They did not, however, confirm which other characters from the show will appear in the game.

Writer Kazuki Nakashima, who worked on Kill la Kill among other acclaimed anime series, is returning to create an entirely new story for the game. While the anime stars Ryuko with Satsuki as the antagonist, the game tells an alternate story from Satsuki's perspective--the kanji for the "IF" portion of the game's name means "alternate thread" or "cloth," a pun on the show's thread and clothing motifs. Studio Trigger considers the game's story canon to the Kill la Kill universe, like "another episode" of the show.

Kill la Kill first aired in 2013 and consists of 24 episodes. It's known for its absurd yet gripping story, visual comedy, and extreme but lighthearted fanservice. While it's not clear if you'll need to have watched the anime to enjoy the game, you should probably watch it anyway.

Kill la Kill The Game: IF is coming to PS4 and PC in 2019. Its developer, APLUS, previously worked on Little Witch Academia: Chamber of Time, another game based on a Trigger anime. Studio Trigger is closely involved in development, including character design. While not directly responsible for development, publisher Arc System Works (BlazBlue, Guilty Gear) also seems to be working closely with APLUS on the game. 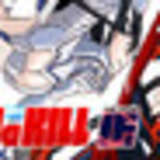