We check out a near-finished version of Gust's upcoming role-playing game for the PS2.

Currently scheduled for release in North America early next month, Ar tonelico: Melody of Elemia is a role-playing game set in the fantasy world of Sol Ciel. Ravaged by two apocalyptic wars that rendered the planet's surface uninhabitable long before the events of the game, Sol Ciel comprises a series of floating continents that are suspended in the air using the mysterious power of Ar tonelico. The world is peaceful for the most part, but increasingly it's coming under attack from strange beings known as viruses, which is exactly what's happening when you start a new game and step into the shoes of a young knight named Lyner Barsett.

The viruses that attack the Tower of Ar tonelico at the start of the game are unlike any that have been seen before, and they cannot be stopped using conventional weapons. The mission you're tasked with, then, is to find and retrieve an object with the power to save humanity--a hymn crystal named Purger. Crystals are powerful items with many uses in the world of Sol Ciel, and those with hymns sealed inside them are perhaps the most powerful of all. You'll learn early in your adventure that hymns and songs are the game's equivalent of magic spells, and that sound exists as a powerful force (not entirely unlike the Force in the Star Wars universe) that female beings known as reyvateils are able to tap into.

We're several hours into Lyner's adventure at the time of writing, and although the game has been almost completely linear thus far, the cast of characters, the intriguing combat system, and a promising storyline have done a great job of keeping us interested. We won't say too much about the storyline for fear of spoilers, but it's very character driven and it has already taken us to a number of quite varied locales. The environments that we've found ourselves in offer only very limited opportunities to explore, but taking the time to stray from the most obvious path or to investigate objects that look a little out of place has invariably rewarded us with more items for our inventory--many of which we have no clue what we're supposed to do with just yet.

The downside of exploring Sol Ciel's environments, unless you happen to be a big fan of random battles, is that your progress will regularly be interrupted by all manner of monsters and other enemies. These encounters are rarely challenging and can get quite repetitive after a while, but they're a necessary evil because defeating monsters is the only way to level up the characters in your party and make them more powerful in preparation for boss battles and the like. Most of the characters that we've had in our party have, like Lyner, employed conventional weapons such as swords and guns, and perhaps because they're still low level, their options in combat have been very limited. Far more interesting to play with are the reyvateil characters, who hang at the back of your party during combat and sing songs that can heal other party members, launch powerful attacks, and even summon powerful creatures to fight alongside you. Ar tonelico: Melody of Elemia's combat employs a turn-based combat system in which every character has his or her own cool-down timer, but reyvateils are controlled differently since you can tell them to sing, stop singing, or activate the powers of certain songs at any time. The caveat is that singing drains a reyvateil's energy, so you can't simply tell one to sing her most powerful party-healing song for the duration of a lengthy battle, for example.

Perhaps the most intriguing thing about reyvateils is that they become more powerful not by defeating enemies, but by establishing a strong relationship with the character that they're fighting alongside. When resting at any of the numerous save points that are scattered throughout Sol Ciel, you'll have the option to engage in a conversation with your current reyvateil, and every time you discuss a new topic that has become available as a result of you finding a particular item or progressing to a certain point in the storyline, the relationship between the two of you will grow stronger. Occasionally, when a reyvateil trusts you enough, you'll be invited to "dive" into her cosmosphere--an environment that exists only in her mind, where you can walk around and interact with various characters that represent different aspects of her subconscious. Completing these sequences has, to date, required us to do little more than engage in a series of linear conversations, but the new songs that you learn at the end of each dive make the button mashing worthwhile.

Although we've barely scratched the surface of it, another feature of Ar tonelico: Melody of Elemia that has the potential to be quite interesting is its crafting (or "grathmelding") system. By collecting recipes and ingredients that are hidden all over the world or dropped by enemies, you can learn to make potions, missiles, and other useful items--the strength of which is determined by the quality of the crystals that you employ in their manufacture.

We've enjoyed our time with Ar tonelico: Melody of Elemia, and we look forward to bringing you more information on the game as soon as it becomes available. 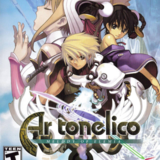