TDK Mediactive announces the North American release of its DC Comics-inspired action game for the Xbox and GameCube.

TDK Mediactive has today announced the North American release of Aquaman: Battle for Atlantis for the Xbox and GameCube. The release of the single-player action adventure game follows the recent return of Aquaman in a monthly comic book series.

"We're proud to be bringing Aquaman, one of DC Comics' greatest superheroes, to next-generation gaming platforms," said Michael Devine, executive vice president of sales and marketing at TDK Mediactive. "With the recent resurgence in popularity for classic superheroes, it's the perfect time to introduce a game that focuses on one of the greatest champions from the ocean's depths."

Aquaman: Battle for Atlantis features a total of 21 undersea levels and will see players attempting to defend the city of Atlantis from a number of Aquaman's archenemies including Ocean Master, Black Manta, and the Lava Lord of the Fire Trolls. For more information, check out our previous coverage of the game. 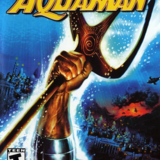