We check out multiplayer monkey madness on the PlayStation 2 in this new import.

Sony's internal development teams in Japan have done some remarkable things with the animal kingdom over the years. If there's one lesson to be learned from the squiggly rabbit in Vib Ribbon, the singing bear in Kumauta, and the Ape Escape monkeys, it's that animals get a lot of mileage out of Sony's hardware. The latest bit of evidence to support that observation has just hit the streets in Japan. Ape Escape: Gacha Mecha Athlete is the recently released PlayStation 2 game that takes the characters we've come to know and love from the Ape Escape series and throws them into a new game that's equal parts Super Smash Bros. and Track & Field.

For the unwashed heathens who have missed the Ape Escape series, the franchise, which began on the PlayStation 2, revolves around cute apes whose minds have been enhanced by special helmets. Ape Escape: Gacha Mecha Athlete finds the pack of hat-wearing simians back in a new adventure that sends them, and the human cast of the series, off on a marathon of competitions, facing characters from the previous games and some new faces as well. The story will play out via in-game cinematics that are suitably melodramatic and filled with apes.

The core gameplay in Ape Escape: Gacha Mecha Athlete lifts its mechanics straight from the previous games in the series. The various competitions you'll engage in will make use of the gadgets seen in the previous games, such as the power sword, helicopter, slingshot, speed hoop, RC car, and row boat, to name a few. The matches will pit you against four other opponents in races either on forced scrolling sections or in enclosed rings. Victory conditions involve collecting more coins than your foes, or reducing their life bars to nothing. The battles are enhanced by a selection of pickups in the battle area that range from health boosters to assorted items that will hinder your competitors. After you've gone through a series of battles, you'll face off against a boss-type character and then go into a final set of competitions that are considerably tougher. The game is very accessible and extremely fun to play, much like its predecessors.

Overall, Ape Escape: Gacha Mecha Athlete's presentation is a solid little package that, while not pushing the PlayStation 2 to its limits, works well. The graphics in the game look good and stick closely to the art style the series has been known for, although they have been improved. The gang now has a more polished look--the models have a darker black outline, resulting in a cel-shaded style. The monkeys are an eclectic bunch with tailor-made designs to convey their various personalities. The designs of the new characters fit in nicely with the original cast. The frame rate appears to be solid and smooth in the early levels we've tried. The audio features an appropriately peppy soundtrack and plenty of heavily emoted Japanese, which fits the action to a tee.

If you're looking to import the game, and kudos to you if you are, know that it is fairly Japanese intensive in terms of menus, although the controls are a breeze to get down if you're familiar with the series. You may miss the game's story elements, but trial and error should get you through all right. While there's no official word on a US release for the game, we'd lay good money that it will find its way to release here. While the last game in the series was passed on by SCEA, Ubisoft actually brought Ape Escape 2 out last year. The series has a loyal following in the States, which should make Gacha Mecha Athlete an attractive candidate for publishers. Whether it's Ubisoft again, Eidos via its Fresh Games arm, or some other publisher looking to warm the hearts of the masses with monkey-fueled antics, we'd like to think we'll see Ape Escape: Gacha Mecha Athlete hit the US at some point. 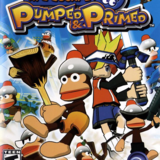