LOS ANGELES--In a day packed with announcements, one of the biggest to come from Electronic Arts on the eve of the Electronic Entertainment Expo pertained to its EA Partners label. As part of its press conference today, EA said that Crackdown creator Realtime Worlds was the latest addition to its EA Partners label, joining a distinguished list of developers that includes Valve, Epic Games, and id Software.

As part of the deal, EA and Realtime Worlds will partner on the release of the Scottish company's long-in-the-making APB, an online persistent-world shooter for the PC. Having first been announced in 2005, and slipping past a number of target release dates, APB is now said by Realtime Worlds and EA to be slated to arrive in early 2010.

GameSpot: This game was initially with Webzen, and then you got some funding and for a time it looked like you were going to publish it yourself. And now you have this deal with EA Partners. Can you explain a bit about how this deal came about, and why you've decided to go with EA on the game?

In terms of the actual management of the game going forward--management of the servers, management of the community--that is something that we will manage at Realtime Worlds. In that respect, we are absolutely the publisher of the game, but we need a publishing partner in order to access the bigger market on a worldwide basis, and that's what led us to the relationship with EAP.

GS: Why EA Partners specifically? Did you talk with other developers who have gone with EAP?

GS: What does having APB do for EA Partners?

Colin Robinson: I think it's fantastic for us to be working with Realtime Worlds, having APB. We've certainly been talking about working with these guys for a long time, so to have the opportunity now is fantastic for us. From an EAP perspective, I think we have a great portfolio of AAA developers, and Realtime Worlds fits in perfectly within that, along with the Valves and Cryteks and ids, et cetera, that we have. So we're very excited, and I'm a big fan of all these gentlemen's games, like many people are, so for this it's a very exciting opportunity.

GS: As for the game itself, it was initially billed as a massively multiplayer online game. Is that the way you guys still see it?

Dave Jones: We tend not to use that term a lot because I think if you watch the industry, you kind of tend to associate certain products with the term MMO. And APB is actually very different. There are 100 players, but yes there are thousands effectively throughout the world. But we want to position ourselves as something a little bit different, because it's a highly done-up action game. It's more like your typical console game to a certain extent. Because it's 100 players, because it's urban-based, we try to distance ourselves a little bit from that, and just try and say it is very unique. And in certain respects Crackdown was like that--you can't really say it was kind of like this or it was kind of like this. That's the kind of games we like to make--we like to try and create genres rather than just fall into the genre. So basically, it's an online persistent game, but an action-based game.

GS: One of the most striking things about this game is the sheer amount of customization available to players. What's enabling you to accomplish all of this?

DJ: Well, first of all, it was identified right at the start. One of the big pillars about APB is that you can be anyone you want to be. I like to make games where it's about the player's story, not about the story we tell. I really want to give as much power to the players as possible. And just because of that, we put a lot of people on working on these types of systems as early as we could. We just said that this has to be when this comes out head and shoulders above anything else on the market.

And that was actually tough, because it actually beats any single-player game, and then we had said there are 100 players, we have to pass all that data around. When someone comes into view, we have to be able to show that each player is completely different from any other player. And so there was a massive amount of technology just in the UI design, how to make it easy, how to make it so people don't create horrible-looking characters--because I'm not a great artist. There's very smart behind-the-scenes work done, in how you pick a color and everything and, let's say a certain tone, there's amazing stuff in the background to make sure that everything looks good in that color. So it was just a big, big driver for us from day one.

GS: So, Gary recently came on, and Dave, you shifted over to creative director. What has that done for the game, or how has that changed the relationship, if at all, at Realtime Worlds?

DJ: Up until then, basically, I wanted to make sure my time was spent best where I felt I'm best at, and as Gary said, we're transitioning now from a developer to an online publisher, and that's a whole new set of skills and new part of business. So really what it meant was that I could keep my time with what I'm good at, and not have to worry about what's Gary's job, going forward.

GS: Do you see yourselves publishing games that aren't necessarily developed by Realtime Worlds?

GD: I think the focus is going to be on the products we have in development of our own. It's very hard to say or start pontificating on 5- or 10-year master plans, really. We're very focused on APB, and we will review that as we go. Never say never, but as I said, we're very focused on some very specific things right now.

GS: There was initially talk of an Xbox 360 edition of the game. Is that still on the table?

DJ: That was something that Webzen raised when they had the publishing rights. After we acquired it back, we said we were going to focus on the PC, get that finished first, and then we can basically evaluate our options going forward.

DJ: Beta dates we haven't talked about yet, but we're looking to launch the game in early 2010. So it's not going to be far away.

GD: The announcement today is the start of a whole program over the next nine months, working with EA to announce details of the game, more details, marketing information, and so on. You'll get a lot more information in the coming months. 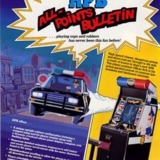