Another Story Of Seasons Is Coming To Switch, And It Looks Relaxing

Amid all the exciting action games announced or shown in the latest Nintendo Direct Mini, one game stood out for how relaxing it looked. Story of Seasons: Pioneers of Olive Town is, effectively, the latest game in the long-running Harvest Moon series (due to some complicated rights issues that necessitated a name change), and it looks lovely.

The game has a familiar set-up: you play as a character who has decided to take over their grandfather's run-down farm, cleaning it up and becoming a member of the community, leaving your city life behind. It sounds a lot like Stardew Valley, which was, of course, inspired by Harvest Moon.

As of right now, the game has only been announced for Nintendo Switch.

The trailer, below, shows off all the wood-chopping, farm-building, and villager-romancing we've come to expect from the genre. Seeing that well-maintained vegetable plot will be enough to make genre fans itch to build something.

There are shades of Animal Crossing: New Horizons here, too--Olive Town is a seaside town, so there will be fishing mechanics to enjoy. 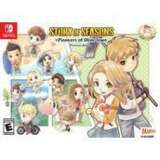