Another Game Is Headed to Wii U Virtual Console

Classic SNES game Super Mario RPG comes to the Virtual Console on Wii U this week.

North American Wii U owners who were jealous of Europe when its users got access to Super Mario RPG: Legend of the Seven Stars won't have to be much longer. The classic SNES game is headed to the Wii U's Virtual Console this week.

Super Mario RPG is one of the rare cases where a Mario game is developed by a non-Nintendo studio. Final Fantasy developer Square (now known as Square Enix after a company merger) produced the role-playing Mario game, which released in 1996.

The Square-developed title features gameplay at an isometric angle and has Mario-like platforming. However, when Mario makes contact with an enemy, players are taken to a turn-based battle, much like what's seen in Final Fantasy games.

Super Mario RPG launches for Wii U on June 30 and costs $8. However, players who own the game on the Wii's Virtual Console can play Super Mario RPG through the Wii U's backwards compatibility support--you will need to use the Wii's Classic Controller accessory if you go this route. 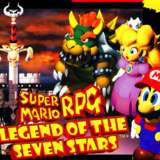