After a swerve, Nintendo finally addresses the demands for Animal Crossing on Switch.

With Nintendo bringing so many of its franchises to Switch, fans have wondered when Animal Crossing's turn will come--especially given how perfect of a match it is for the portable system. While details were more than light, the company did finally answer that question during its September Nintendo Direct stream: 2019.

As the presentation came to a close, we saw footage of Animal Crossing's Isabelle hanging out in the mayor's office, lamenting your absence. It seemed as if it was preparing an announcement of Animal Crossing, only for it to turn into a reveal of Isabelle as a playable character in Super Smash Bros. Ultimate.

After a look at her in action, the video then cut to Tom Nook, seemingly setting him up as a character. Instead, he talks about getting things ready from when they're tired of playing Smash and the Animal Crossing mobile game, which led to the announcement of Animal Crossing for Nintendo Switch (the current working title).

Unfortunately, we didn't get any more details than that, just that it's coming in 2019. A subsequent press release from Nintendo affirms this is a "mainline" game, marking the first since 2013's New Leaf for 3DS. That would suggest it'll consist of the same basic town management, house-decorating, bug/fish/fossil-collecting gameplay we've come to know and love, though just what kind of changes Nintendo has in store for us remains to be seen.

You can check out how the announcement unfolded for yourself above. We'll report back as Nintendo reveals more about the upcoming game, and what kind of tie-ins it'll inevitably offer with the mobile game. 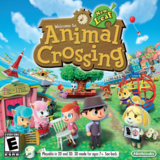