Over 30 collectable Telepods figures from Hasbro will be available. Players can place these figures on their phone or tablet camera to scan them into the game. Check out the video below for more on how this new feature will work.

"At this point we will not comment on rumors or speculation that Jar Jar Binks will be in the game," Rovio said in a statement.

Also for the first time, players will be able to choose their side in Angry Birds Star Wars II. Gamers can "join the Pork Side" or enlist with the emperor, Rovio said.

In addition to the Telepods toys from Hasbro, new Angry Birds Star Wars II plush, books, and apparel will launch alongside the game on September 19.

The original Angry Birds Star Wars (2012) is based on the original Star Wars trilogy, casting the Birds as the Rebels and the Piggies as the Empire. 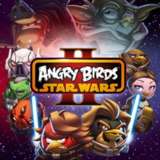