Angry Birds Space is the sequel to 2009's Angry Birds, which has been downloaded more than 700 million times. The new game boasts a fresh setting and new birds and launched on Friday for the PC, Mac, iOS, and Android.

For more on Angry Birds Space, check out GameSpot's review. 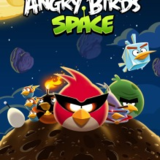