Analogue Pocket Pre-Orders Sold Out: Sign Up For Restock Notifications

The Analogue Pocket is the company's FPGA-based handheld that plays games from the Game Boy, Game Boy Colour, Game Boy Advance, and more.

Announced last year, the Analogue Pocket finally has a release date: The handheld will start shipping in May 2021. Analogue's FPGA-based handheld is capable of playing games from several libraries, including the Game Boy, Game Boy Color, and Game Boy Advance. The Analogue Pocket is $200 USD and comes in both white and black, while the Analogue Dock is $99.

Pre-orders went live today (August 3) but sold out extremely fast. You can sign up now at Analogue to be notified when the Pocket and its accessories become available again. Beware: Scalpers are already selling the Analogue Pocket for ridiculous prices at places like Ebay. You're better off waiting for the restock.

Pocket pre-orders are sold out. We will be producing more and do our best to meet demand during this unfortunate global state of affairs.
Signup at https://t.co/E3wd4IdMbE to be notified by email when we are able to make Pocket + accessories available again. pic.twitter.com/K3is9xG5uk

The Analogue Pocket boasts a 4300mAh battery that allows for 6 to 10 hours of play time (or 10+ hours of sleep time). It can be put into sleep mode and awakened by pressing the power button. This allows you to pause your games whenever you like and resume them as such--no GBA Sleep Mode compatibility required.

The Analogue Pocket also features "Original Display Modes" that make the Pocket's display look like the original handhelds. This makes it so you can play Game Boy, Game Boy Color, and Game Boy Advance games as if you were playing on the original hardware, with the aspect ratio and green glow intact. 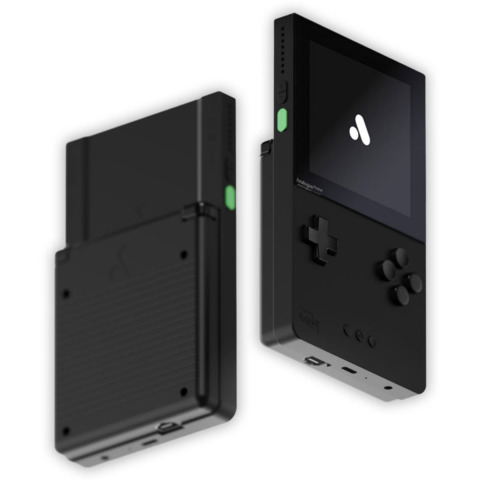 The Analogue Pocket is also capable of being docked into a separate device that allows you to play your portable games on a TV. The Dock supports up to four controllers via Bluetooth, 2.4GHz wireless, and USB. The Pocket is also capable of link-cable multiplayer, similar to the original handhelds, though you will need a cable that's sold separately.

Analogue also revealed some new accessories, including a transparent hard case, a tempered glass screen protector, a USB-C power supply, and cartridge adapters for Game Gear, Neo Geo Pocket Color, and Atari Lynx. While you can buy a screen protector, the Analogue Pocket's display is made of Gorilla Glass, which produces a screen that's about three times the thickness of most smartphones.

Since its reveal, both the Analogue Pocket and Dock have received a small design change. On the Pocket itself, the start, select, and home buttons have been moved to the low-center of the handheld. The Dock's USB-C connection port has also been recessed to increase the Pocket's stability.

The Analogue Pocket is only the latest system to make playing the games of our past easier--check out our guide to retro gaming for the best consoles and accessories for playing classic games.