An Interview With Aaron Staton of L.A. Noire

We talk to the star of Rockstar and Team Bondi's crime thriller about going from TV to games, the challenges of L.A. Noire's performance capture, and more.

If you've ever seen the critically acclaimed AMC drama Mad Men, chances are you'll recognize Aaron Staton from his role as the affable advertising executive Ken Cosgrove. But if you're a regular GameSpot reader, you'll likely recognize Staton from something more. Staton is the star of Rockstar and Team Bondi's upcoming crime thriller L.A. Noire, one of our most anticipated games of 2011. Playing police officer Cole Phelps, Staton is essentially the poster child for the impressive new MotionScan performance capture technology that's been responsible for the bulk of the game's buzz thus far. We had a chance to chat with Staton over the phone last week to see what his experience with L.A. Noire was like.

GameSpot: Before you got involved with L.A. Noire, what was your concept of an actor's role in video games?

Aaron Staton: Well, I started playing video games as a kid. I played Atari; lots of Pitfall and Space Invaders…and then Nintendo. Now I play Xbox primarily. I guess I sort of became aware of the actor's role or presence in a game…probably like in the last five years or so. I can say the first Max Payne was probably when I became aware of it because, you know, there's the story and everything is integrated.

GS: What convinced you to get onboard with L.A. Noire when you heard about this game initially?

AS: I had a conversation with [L.A. Noire writer/director] Brendan McNamara about the world of the game, the concept, the character, and he sent me some test footage of the MotionScan technology. Just being a part of this groundbreaking fusion of performances…it's not that actors haven't been involved [in games before], but just the incorporation of the physical performance in a game, combined with some of the stylistic elements and the story…I think it's kind of a new genre in a way. And it's going to utilize those performance aspects throughout the gameplay. I found that all intriguing.

GS: With video games being one of the younger forms of media out there, was there any initial concern on your part moving from a critically acclaimed TV series to a video game? And, how that move might be seen by traditionalists as a step down?

AS: To be honest, no, because more and more those lines are blurred. I mean, the last Call of Duty game…if you look at the cast…it's Ed Harris and Gary Oldman and Sam Worthington. It's not like this avant-garde, undercover form of media, you know what I mean? It's not so separate anymore.

GS: Now that the project is complete, how would you say that the full experience compares with what you were originally expecting from the outset?

AS: Much bigger, I would say. Even though I knew going in, it was a lot of material, I guess I hadn't heard the 2,200-page script number. But even so, I think just ultimately, it was bigger than everyone expected really…because the MotionScan portion of the process was three months of consecutive time. But then, we went back, and for the next six months or so, we'd sort of pick up days or weeks here and there just to fill out the world even more. As things were pieced together, they realized that they needed a broader palette of reactions for the infinite number of things that could happen. They needed an almost infinite number of reactions or what have you from the various characters. And so, I think we all just sort of discovered that fusing these two things together…that it was bigger than anticipated. I don't think anybody really could have said going in, this is exactly how it will go. So, I couldn't have been briefed entirely…you know what I mean? 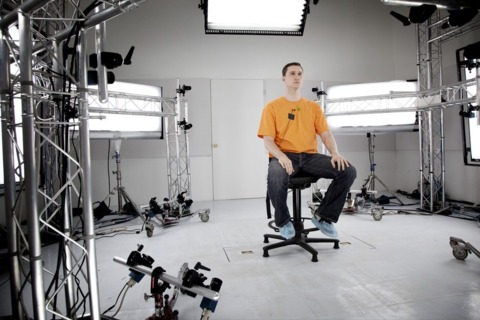 Staton seated in "the rig," the nickname for the MotionScan performance capture seat.

GS: The pictures and the footage that we've seen of you in that MotionScan chair look kind of intimidating. It's this bright white room and you're in this orange T-shirt, and you've just got these dozens of cameras surrounding you. Do you remember what went through your head when you sat down in that chair for the first time?

AS: Yeah, the first thing I thought was, "This is bright!" And it was! [Laughs] But the first thing I thought, well…the door is closed and I realized, "Wow, this is definitely an isolating experience." Like you said, it's literally just you in this room, and you've got 32 cameras, and you've got Brendan on the other end of the microphone. So, we would have dialogue back and forth, but there was no [other actor], and the cue was a beep or a shouted cue of "action." So, there wasn't the dialogue exchange, and for a game that's based on interrogations, so many of those cues are physical…as players will see playing the game. A lot of that was a challenge, sitting in the chair and sort of trying to imagine those cues; whereas on a set, be it film, TV, or on a stage, there would be an actor present to give you that cue.

AS: [Laughs.] Just time, honestly. With anything, as you go to work every day, the first time you make a commute, it's like, "This is really long." And then, you make it for a month, and then you realize what routes are going to have the most traffic, where the spots are going to be, and you make a playlist and head out the door, and you sort of build it into your day. And it's the same thing, I think, with any sort of job or process. Once you're comfortable in it, it becomes routine. And that's not to say the challenge went away, but I, at least, came to know what the challenges would be. So, that's the part that became routine. It's just knowing that I would have to be creating that stuff and the tricks to do it. Just trying to figure out what worked, what [I] would read, where to play certain things, where the eye lines were, and trusting Brendan on the other end of the mic to tell me that it was working out.

GS: A lot of people might see some similarities between Cole Phelps and Ken Cosgrove from Mad Men in terms of them being…

GS: [Laughs] Right! But you know, these likeable all-American guys in this period setting. Is there anything about Cole Phelps that you think is going to really surprise people that are used to seeing you on Mad Men?

AS: Actually, the characters are worlds apart. I mean, you mentioned a couple of things that connect them, and I guess they both look like me. [Laughs] But ultimately, they really are worlds apart. Cole Phelps has some complex things to prove, and Ken really doesn't have much to prove. I mean, he really is pretty comfortable. You know, things sort of seem to work out for him, and Cole Phelps is by nature someone who could never expect something to work out. So he has to work at it diligently and, I think, to his detriment at times. And just to put it broadly, there's a darkness around Cole Phelps that isn't around Ken. And that's in part the world and the nature of these crimes, and the weight of the war, and things that he'd seen, and things that he's been a part of. But then, also, there's this desire to atone for those things. But also, I think this desire to do good and to do right is maddening in a way.

GS: What sort of reactions did you get from friends and family when the first L.A. Noire trailers started coming out?

AS: Well, immediately, I was getting texts from game-playing friends, and they were just real excited. I think (a) for the game, and then (b) to see me in it. And I think people were just surprised to see how much, you know, it looks like me. I mean, it is me. Then, I got some texts from a few people that didn't know that I was doing it but did as soon as they saw the trailer. At least initially, people were just really blown away by the technology of it and not only recognizing me…but to say, "Hey, and I recognized so and so," or, "I worked for that guy," and such and such.

GS: Are you prepared for that first moment when you're out in public and somebody walks up to you and says, "Hey, I know you. You're that guy from L.A. Noire!"

AS: [Laughs]You know, that'll be such a trip. I definitely think that that would be the first time anybody would have ever been recognized from a video game. I guess we'll see. I don't know. I got texts from people who knew me, who recognized me in the game…but to think of the reverse, you know, somebody who didn't know me, is wild. 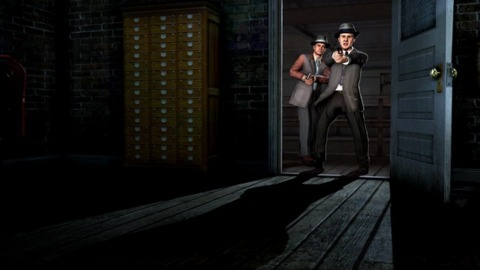 GS: Now that you're done with this game and everything's wrapped up, what would you say you've learned about video games as a medium after working on L.A. Noire?

AS: The scale of it really…it's just so much bigger than I thought. I'd sort of seen them as a consumer lined up on the shelves and waiting for sequels and things, but to realize what goes into it. And before I was ever there! I was a part of the last year and a half of…I could be wrong on the number…but I think it's somewhere around a seven-year process at this point. And, you know, I think a good portion of that has to do with technology catching up to the size of the story. But that's just a long, long process.

GS: There's sort of an ongoing debate in our industry over video games about whether they can be considered an art form these days. One of the vocal opponents of that idea is actually Roger Ebert, who has very, very adamantly insisted that video games are not an art form. After everything that you've put into L.A. Noire and what you've seen of it in action, where do you see yourself in that argument?

AS: Well, I think the biggest indicator as far as how [L.A. Noire] is perceived is its admission to the Tribeca Film Festival this year. I think that's a pretty big indicator of where we're headed; if not, where we might be…and just graphically, with the way that these consoles are improving and the technology. But "art" is such a funny word. I don't know if you've seen Exit Through the Gift Shop, but it's such a subjective sort of thing or term.

GS: Absolutely… how we perceive art and what art means to different people.

AS: Right. Because I guess you could say, well, film is art. But I could probably show you a couple of films that aren't. There's an art to making film, and there's was an art in making that film, but was the product art? I don't know. But is making a film an art? Yes. Is making a video game an art? Yes. Is animating an art? Yes. Is this game art? Is it art? You know, I think so. But I think that it's such a subjective term and qualification.