Turn a basic spell into a five-fireball homing attack that casts itself again on impact.

Games have allowed players to create their own spells before--that was the basic concept of Magicka--but I've never seen a system quite like the one featured in Mages of Mystralia.

On the surface, Mystralia plays out a lot like a Zelda game. You set out on a quest that has you squaring off against enemies, smashing jars to restore health and mana, and collecting treasure. You'll face puzzles where you have to find a way to light a hard-to-reach torch, avoid traps, or defeat all of the enemies in a room before you can proceed. It's fairly standard fare in that regard.

Where Mystralia becomes something more than a Zelda clone is with its spells. Rather than a hookshot, bow and arrow, or bombs, you acquire four different magic spells: a fireball, shield, electric melee attack, and a ground-freeze. On their own, these are extremely simple, as a fireball merely sits in place until it makes contact with the enemy, while the melee is a basic cleave.

Over the course of the game, you'll earn a wide variety of modifications for these spells, allowing you to potentially create millions of combinations according to developer Borealys Games. No doubt many of those are only slight variations, but they can be substantially different, and the level of customization at your disposal is impressive.

Early on in my time with the game, the modifications were as simple as making the fireball shoot in a line. Before long, I could shoot multiple fireballs at once or cause them to fire out at a curve (which will undoubtedly be useful for puzzles), or turn my shield into a dash that leaves behind a clone to attract enemies.

These mods are lumped into three categories: behaviors, augments, and triggers. You're not limited to using any one mod, and it's the ways in which you can combine these--particularly the Impact trigger, which causes a spell to then cast another one once it hits something--where things get exciting. Using this, I created an attack that launched five homing fireballs out in a line. Upon hitting something, it would then trigger this same spell to cast again, creating a devastating loop. I also watched a developer create one where you'd dash to create a clone that casts three fireballs that bounce off walls, and those would trigger another spell that causes boulders to fall from the ceiling. (You can see all of this in the video above.)

While you have a good deal of freedom in creating spells, there are some limitations. The customization screen presents you with a sort of grid centered around a spell. The spell and each mod has arrows pointing in certain directions, and in order to take effect, mods need to be connected back to the spell itself in some way. This turns spell-creation into a puzzle of its own.

Your mana pool also forces you to account for more than just what would be cool on paper. Everything from the basic melee spell to the crazy ones I outlined above cost some amount of mana. Creating a hugely powerful one that consumes all of your mana can leave you vulnerable, as a dash or shield spell then can't be used to escape danger until you regenerate enough mana. Spells that trigger additional spells can easily suck up your mana, as each subsequent cast requires mana.

Even with these restrictions, it's still possible to "break" the game. After trying a more traditional approach against a boss at the end of my demo, I equipped the fire spell I described above and instantly wiped out the boss's remaining health (which was still nearly 75 percent full). That might sound like a recipe for an exceedingly easy game. Business development manager Dan Adelman, who is working with Borealys after helping shepherd indie darling Axiom Verge to success, noted that such a spell needs to be well-timed (in addition to well-designed) in order to legitimately one-hit the boss. Even so, Borealys isn't looking to stomp out these kinds of possibilities.

"If someone can come up with a spell that can do that--like, they think it through and they figured out how to do that, then more power to them," Adelman explained. "But that's why we're doing a lot of beta testing. Since there are potentially millions of spells you can make, we want to see if there is something that's really game-breaking. Being able to one-shot kill a boss isn't really game-breaking if they thought it through. That's kind of the game: can I outsmart the game? But if by doing a spell, you can bypass an entire area [where] you needed this thing and you didn't realize that, that wouldn't be fun."

Even if Mystralia does prove to be a cakewalk if you manage to create incredibly powerful skills, it looks as if experimenting with the spell-creation system will still make for an enjoyable experience. If it can provide a challenging journey over its 15 hours, Mystralia could turn out to be something special. 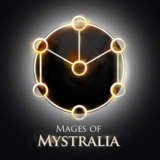