How the latest game in the Assassin's Creed series has affected one fan's hopes for its future.

Back in 2009, GameSpot sent more than a few readers into a tizzy when we named Demon's Souls game of the year over the universally acclaimed Uncharted 2. That decision was never an easy one. Both games were superb experiences. Both were the sort of games you could praise for hours on end without running out of steam. And neither was my favorite game of 2009.

No, that honor went to Assassin's Creed II, the game that cemented my love affair with the series. I had a terrific time with the original Assassin's Creed back in 2007, but like so many others, I knew in the back of my mind that this game's best quality was its potential for what might come next.

What that first game did right, it did exceptionally well. That feeling of boundless momentum as you leaped across rooftops and scaled entire buildings, the sinister joy of stalking your target, planning a kill, and executing it to perfection. It had a style and flair all its own, but it hadn't yet translated that into an identity.

With Assassin's Creed II, the folks at Ubisoft Montreal did just that. Here was a sequel that took the core elements from the first game--the stylish movement, the thrill of a perfectly executed assassination--and expanded on them in just about every conceivable way, thereby establishing a distinct personality in the process. 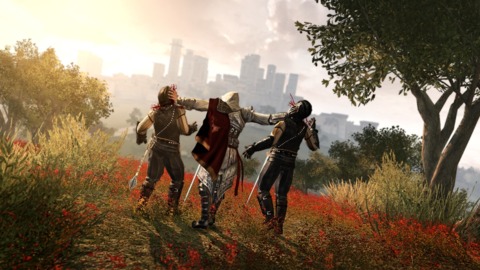 One of the many features that made Assassin's Creed II great.

Whereas the first game suffered from repetition and a pervasive feeling of deja vu, the sequel gave us a feature-rich open world brimming with reasons to go exploring. I can't tell you how much time I spent searching for glyphs, trekking through those beautifully designed underground tombs, or simply wandering the streets and rooftops looking for historical landmarks. If Assassin's Creed gave you the ability to run and jump like a maniac unconcerned with gravity, then Assassin's Creed II gave you a reason to do so.

Assassin's Creed II also gave me a reason to care. It presented the debut of a new protagonist, the young Florentine nobleman Ezio Auditore da Firenze. Ezio began the story as an affable ladies' man in the carefree haze of youth, but his life took an abrupt turn for the worse when several family members were publicly hanged as a result of some sort of political conspiracy. This sent Ezio and what was left of his family into hiding, which then began his search for answers and vengeance.

It was a story anchored in universal themes: the desire to protect one's family and our inclination to return the favor against those who've wronged us. Unlike Assassin's Creed's stoic and mysterious protagonist Altair Ibn-La'Ahad, we were given plenty of reasons to empathize with Ezio. He was more than a ruthless killing machine: he was a guy with a family trying to figure out his place in the world…who also happened to be very good at stabbing people in the face.

Assassin's Creed II was a remarkable achievement--my favorite game of the year by a pretty comfortable margin. After all was said and done, I couldn't wait to see what Ubisoft had in store for Assassin's Creed III.

Well, that was silly of me, wasn't it? You know how this story turns out.

I don't know whether I'd consider either of those games full-on sequels. To me, they occupy some nebulous space between sequel and expansion pack, adding layers of new gameplay mechanics and story continuation without doing much to the core elements that have made Assassin's Creed one of my favorite franchises of the past decade. I loved Brotherhood, and I liked Revelations, but neither one of them hit me with the same impact as Ezio's debut back in 2009.

And that's been bothering me. With each successive game--particularly in the case of Revelations--it feels like the series is veering further and further from what I've enjoyed most about it. There's a gradual loss of focus, a series morphing into a pastiche of new ideas and experiments that sometimes work but more often don't. I wouldn't go so far as to call the games bloated, but I've certainly had to work that much harder to be the assassin that I enjoy being. 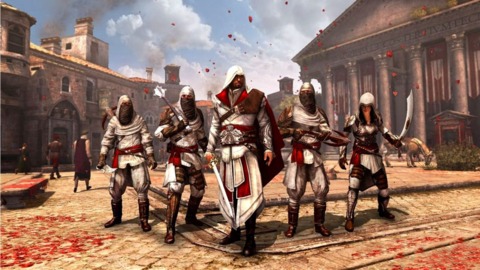 Brotherhood did a lot of great things, but managing assassins didn't pull me in.

With Brotherhood, it was more of a hint of things to come. Its failures were largely offset by some genuinely great elements, like a terrific multiplayer component, even better underground caverns, and an improved economy that fixed a glaring issue in ACII where you literally earned more money than you could spend. But the system of recruiting and managing assassins fell flat with me, failing to establish any meaningful connection to Ezio's immediate surroundings. Renovating landmarks lacked the practical value of renovating shops, and the various Da Vinci war-machine missions were a weirdly inconsistent exercise in frantically learning new control schemes just in time to not need them anymore.

I've had to work that much harder to be the assassin that I enjoy being.

This past year's Assassin's Creed: Revelations lacks Brotherhood's flashes of brilliance; it refines a few elements here and there but fails to bring forward any meaningful contributions to the formula. There's really nothing bad about what Revelations introduces to the series, but so much of it feels unnecessary and incongruous with the rest of the game.

The den defense sections, with Ezio placing troops while standing as still as a statue, couldn't be further removed from what I love about freely darting across rooftops. Bombcrafting makes for an interesting diversion, but like calling in assassin strikes, it's a superfluous aid in a franchise where combat is already incredibly forgiving. And then there are the Desmond sections, which are a confusing mix between enjoyable character exposition and clumsy, bewildering puzzle platforming.

All too often, Revelations feels like one missed opportunity after another layered into an increasingly massive web of distractions. On top of that, Ezio's role in the story has been reduced to a vehicle for exploring more obtuse historical secrets and political intrigue. He's as likable and charming as ever when the story allows for it, but the bulk of the game doesn't really feel like his journey. That personal connection I felt toward him in ACII is gone; now, he's more like Atlas bearing the weight of the ever-growing Assassin's Creed canon, one pained grunt at a time.

I'm sure Revelations, if viewed in a bubble, is a highly enjoyable experience.The core of the series that I love so much--the feeling of effortlessly jumping across rooftops and stalking targets for the perfect strike--remains perfectly intact. It just feels ignored and a bit dusty. Instead, you have all of these different elements swirling around that core that fail to really move the series forward, and the end result is a game that feels redundant and oftentimes unnecessary.

…like Atlas bearing the weight of the ever-growing Assassin's Creed canon, one pained grunt at a time.

And now, thanks to the level of honesty you can only find in corporate earnings calls, we know that yet another Assassin's Creed game is on the way later this year. All the rumors suggest that there will be a brand new character in a new historical setting, but I'd be lying if I said there wasn't a faint worry in the back of my mind that the series has established a certain trajectory with the past few games and that this next game will only continue it.

It's an odd position to be in. I love this series like few others, and in spite of my issues with Revelations, I still managed to have a good time with the game. But it definitely feels like I'm approaching a crossroads here. I can easily see "good time" eventually becoming "guilty pleasure." 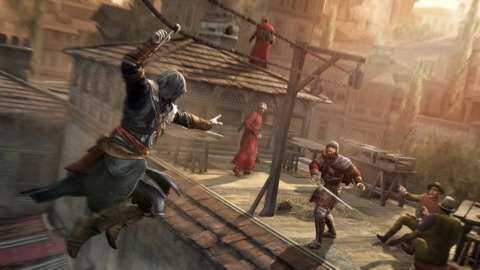 The hook blade did a little bit to liven up your movements, but I'd loved to have seen it do more.

I think there are a few ways that this can happen. First and foremost: Ubisoft Montreal has to take every last advantage of the new historical setting. Use the new timeline and environment to build on the way players move throughout the gameworld. The feeling of momentum and acrobatic wizardry is without a doubt the best part of this series, but it has to evolve.

Ubisoft Montreal has to take every last advantage of the new historical setting.

The hookblade was a good start. Make sure this new era means new technology is at our disposal for maneuvering through the gameworld. And make sure the new city's architecture affects our traversal as well. If it's something like 19th-century New York City and the streets are much wider than Rome or Istanbul, give us a fun new toy for making those massive leaps across rooftops. Let us hitch a ride on trolley cars or zip across power and telegraph cables. Hell, set the game during winter time and let us slide across ice-covered rooftops.

Outside of evolving how we move through the world, give us new reasons to explore that gameworld. The scattered Animus fragments in Revelations didn't do it for me because they were tied to those awkward Desmond sections, but the glyphs in ACII led us to delightfully ridiculous puzzles which themselves unlocked another chunk of of that excellent Eden video. Build on that with new incentives to explore the city and attach them with meaningful rewards.

And, finally, give us a story anchored by a character worth caring about, and don't let his or her personality be overshadowed by the canon. Ezio is one of my favorite video game characters of the past decade, but his role in the story seemed to grow smaller and smaller with each successive installment as those games focused on diving into ever-deepening pools of mystery and conspiracy. Start off by giving us a reason to care about this person, and let that personality shine even as the character unravels the bizarre secrets of the war between Templars and Assassins.

I have no doubt that the team at Ubisoft Montreal is capable of breathing new life into this series. Anyone who has played one of these games before knows the artistic talent and sheer attention to detail that goes into creating an Assassin's Creed game. But I'm truly hoping that the team uses this next game, with its new setting and characters, as an opportunity to return its attention to the core of Assassin's Creed and really move that part of the game forward. Forget the menu-based strategy minigames and tower-defense mechanics. Remember what made this series stand out in the first place and give those elements the update they deserve.

There are 435 comments about this story
Load Comments (435)