We get an advance look at the character-creation and single-player components of the upcoming official US Army console game.

We'd say that when America's Army hit the PC two and a half years ago, it was a much better game than it had any right to be. The pedigree was certainly suspect: A tactical shooter was to be released for free, developed by the United States Army, and it would function as a recruitment tool as much as an entertaining game experience. Who knew that it would become one of the most widely played shooters on the Internet? Ubisoft and developer Secret Level aren't asking any questions. Instead they're taking the original concept, along with further input from the Army's subject matter experts, and bringing the concept to consoles with America's Army: Rise of a Soldier. "But America's Army is an online-only game," you say. Thankfully, in addition to a fully featured multiplayer mode, the designers are creating a lengthy and surprisingly complex single-player campaign for the game, and we recently got the full rundown.

As the name implies, Rise of a Soldier's single-player mode will focus on the experience of an Army recruit as he develops and moves through the ranks, from basic rifleman all the way to Special Forces fireteam commander. The game will feature what looks to be an extensive character-creation system, whereby you'll get to name your soldier and customize his appearance. You'll even get to select his home state and nickname, which will personalize the experience as you move through the game and interact with other members of your unit. Finally, there will be a number of archetypes on offer that you can choose from; these will apply to the skill set your character will have. The archetype you choose will prompt the game to suggest which skills you should develop the most to build a soldier who's proficient in the areas associated with that type.

The game's skill system will provide a lot of its depth and replay value. After you finish a mission, you'll be evaluated on your performance and granted an appropriate number of experience points, which you can apply to a variety of different categories, like leadership, observation, marksmanship, stealth, honor, medical training, and physical fitness. Increasing your skills in these categories will enhance your real-world performance once you fight in subsequent missions, and you'll be able to go back and replay past missions to improve your skills and gain more experience. You'll also be able to achieve varying levels of success at the end of a mission, which will further enhance your gains.

There will be 35 missions in the game's single-player campaign, split across the seven roles in groups of five. You'll begin as a rifleman--the basic grunt--and play through missions that cast you as part of a larger team. You'll be taking the orders in these missions and helping your allies complete the overall mission by doing your part. As you progress, you'll be able to take on other Army roles, such as a grenadier, and each of the six roles subsequent to rifleman comes with its own set of five missions. You can tackle these roles in any order, and it will eventually lead up to your promotion to a Special Forces team leader, at which point you'll finally get to start giving the orders instead of taking them.

The core gameplay in Rise of a Soldier will be similar to what players may be familiar with in the PC version, but Secret Level is crafting some unique gameplay mechanics to set Rise of a Soldier apart from the pack of tactical shooters that are out on consoles. Chief among these is the combat-effectiveness meter, which indicates how ready you are to fight. Most other games merely take your stance--standing, crouching, or prone--into account in determining your accuracy, but America's Army also looks at your health, skill levels, experience, rank, and even what's going on around you in determining your combat readiness. Your overall effectiveness is then displayed on a simple meter that's on the heads-up display at all times.

The other interesting gameplay aspect is the zoom-level view for firing, which looks to be a lot more realistic than in other such games. You'll be able to raise your rifle to eye level and use the iron sights to more accurately draw a bead on your target. But once you've zoomed in, your range of motion will be pretty limited. You'll essentially have to pick your target before zooming in, which will get you close to your mark, and then you'll fine-tune your aiming with the thumbstick to get the right shot. As with most of your abilities, you'll further improve your aiming by investing skill points as you progress through the game.

We got our hands on the game for a few minutes after our demo, and though the game is still several months away from release, the core gameplay feels solid. We tried a Special Forces mission from late in the game to check out the command abilities, which are accessed through a quick radial menu. You can use this interface to have your team advance, lay down suppressing fire, use a grenade launcher, or even call in a mortar strike from offscreen. The iron-sights aiming system also works well, though it may take a little getting used to. By the end of our demo, we were picking off enemies with relative ease and subtle aiming adjustments, so it seems that the system is easy to get a feel for.

Some of the original America's Army assets, such as maps, are being repurposed for use in Rise of a Soldier, though they're being adapted to provide a new experience even for veterans of that game. For instance, some missions will place you in a team with a support role, and you'll have to provide cover for the primary teams who are accomplishing the main objective. The style of the game is consistent with the PC version, so everything from the environments to the gear to the soldiers' uniforms is as realistically modeled as possible.

Ubi and Secret Level are waiting until a later date to take the wraps off Rise of a Soldier's multiplayer mode, though representatives did confirm that the extensive character-customization and skill-upgrade systems seen in the single-player game will be present in full for online matches as well. The Xbox version of the game will play on Xbox Live (of course), while the PS2 version will set up matches through the previously established ubi.com service. America's Army: Rise of a Soldier is scheduled for release later this year. We'll bring you more on the multiplayer and other features of the game in the coming months. 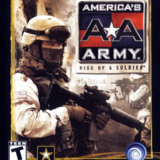