Alice creator's first project since relocating to Hong Kong will be a comedic actioner sending up the West's "fear culture."

Just over a year ago, American McGee, the controversial game designer, sent waves through the industry by exiting the US. The enigmatic designer joined Enlight Software, based in Hong Kong, as the company's creative director, lending his flair for story and visuals to founder Trevor Chan's track record of critically praised empire-building games. At the time, McGee said his goal was to bring "an entertainment perspective" to Enlight's games and that his collaboration would have "interesting" results.

Now, McGee has pulled the curtain back on his first project at Enlight, Bad Day L.A. Featuring a "comedic storyline that plays off the fear culture" prevalent in Western society today, Bad Day L.A. is an action game that's clearly going for an odd mixture of laughs and drama.

Enlight says that in BDLA, gamers will be "thrust behind the shopping cart of a homeless-man-turned-city-saving crusader." The main character, one Anthony Williams, is a "reluctant hero who left behind the privileged life of a successful Hollywood agent after losing his self-respect." Williams encounters a number of challenges while traveling around the titular Southern California metropolis, including zombies, terrorists, and earthquakes.

Bad Day L.A., according to the publisher, is designed to "satirize" Los Angeles and disaster films. It will have 10 levels that will place gamers in a variety of LA neighborhoods, including Hollywood Boulevard, Venice Beach, and Beverly Hills. The game will also sport a distinctive, cel-shaded visual style developed by husband-and-wife illustration operation Kozyndan.

We spoke with McGee from the Enlight offices in Hong Kong.

GS: What we know about the game's main character is that he's a crazy, cynical homeless guy. American, where did that character profile come from?

AM: Ha! It came purely from my experience living in Los Angeles. To be honest, the game concept was inspired by a billboard that I saw while driving along Sunset Boulevard one day. There, hanging above the glitz and glamour of the Sunset Strip, was an overly PC billboard that inquired, "Bioterror attack. Are you prepared?!" And I thought to myself, "Uh, no." At that moment, I decided to create a game about the current American "fear culture" and have it presented through the eyes of the ultimate reluctant hero...a man who's given up on humanity and himself.

GS: Can you go into a little detail about how you and Enlight founder Trevor Chan work together? What do you each contribute to the game-creation process? Is there an element of East meets West (in a good context, I mean), or is it strictly games as the common culture and language?

AM: Actually, our relationship is strictly business. I create; he finances and publishes. The major reason why working with Trevor is so great is that he's willing to let the creative be the creative, and he's willing to take risks on original concepts...something that very few publishers these days are open to.

GS: It says in the backgrounder I was given that the title will give players an "escape from their everyday fears." I get a bit of a post 9/11 vibration from that statement. Is that by design, or am I reading too much into it?

AM: No, you're not reading too much into that statement. The primary narrative thrust of the game deals with a Los Angeles that is suffering under every imaginable natural and unnatural disaster...all to show how completely ridiculous our fear and apprehension truly is. The game has a lot of political message to it, but unless you look hard, you won't really find it. At the end of the day, we're working to make a great, fun game.

GS: What are the key experiences you are hoping this game will deliver? Laughs? Escapism? Feeling of adventure? Conquest?

AM: Lots of laughs, for sure. We're comparing our main character to someone like Dave Chappelle or an early Eddie Murphy. So, first and foremost, you're going to be assaulted by one of the most irreverent and insane central characters you've ever seen in a game. Beyond that, it's a very story-driven action adventure title. All movement through the game is about overcoming obstacles in humorous ways.

GS: On the project management side of things, where's the team located? How many people are working on the game? What exactly is your role? Trevor's role?

AM: The team is located in Hong Kong. There are currently over 35 people working full time on the game. I'm acting as lead designer, writer, creative director, etc., etc. Basically, [I'm] doing what I have to do to get the game done right. Trevor takes a very hands-off approach to what we're doing with the game.

GS: I know you, or at least think of you, as someone very much connected with the scene in Los Angeles. Is Hong Kong, in any way, rubbing off on this game?

AM: Not really. It wouldn't really be appropriate. LA has such a distinct vibe about it.

GS: What's up with you as a game designer? Over the past few years, you've been one of the few advocates of games being part of the broader entertainment spectrum, and you've delved into TV and film. Is any of that philosophy being applied to the upcoming game? As in: multiple interations, BDLA: The Podcast, BDLA Meets Majestic, etc.?

AM: You might see us developing this as a feature film, soundtrack, toy line, graphic novel, and possibly other merchandise. I'm a huge believer in "tipping point" market dynamics. We're also starting work on a sequel. 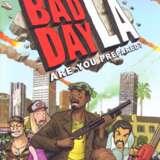