See armies of thousands of units clash in early America, in the latest RTS from the developer of Cossacks.

With a strong sense of history, nice animations and art, and some unique gameplay elements, American Conquest looks to take historic battle re-creations into the field of accessible real-time strategy. Gone are the symbols and figurative representations of huge armies from wargames; what you see is what you get. And what you get are accurately massive battles with thousands of units facing off, without sacrificing the beloved real-time strategy aspect of base building. Real-time strategy games, for the most part, have tried to avoid presenting thousands of units onscreen at once to avoid the hassles and difficulties that come with showing combat on such a massive scale. But American Conquest, from GSC Game World, the German developer of Cossacks: The Art of War, flies in the face of this RTS convention by literally handling up to 16,000 units on the maps at once. The fact that American Conquest doesn't balk or even flinch (on high-end systems, at least) at presenting so many individual units is perhaps the most visible and most interesting advancement that American Conquest brings to the table, but it's certainly not the only one.

Upon first glance, the most similar games to American Conquest are Shogun: Total War and its predecessor Medieval: Total War. But even though similarly massive armies are at your command in American Conquest, you still have control of the individual units, instead of commanding them in large groups as in the Total War games. Since American Conquest keeps the traditional real-time strategy staples of base building and resource management, it's even further unlike Shogun and Medieval, which forwent those elements to focus solely on the tactical combat. As a result, American Conquest won't bog you down with heavy tactics like Shogun or Medieval and should be immediately familiar to real-time strategy players--you'll need to build up a base, harvest resources, create units, manage upgrades, and handle basic diplomacy. The interface should also be very intuitive, as the traditional commands and interface layout for attacking, moving, creating groups, building, and managing formations are all here in the normal places, and the features all work as you'd probably expect. One nice new addition, though, is a view that scales the map to a factor of four, showing a miniature version of the whole map, including troops and buildings--and you can command armies in this view.

The choice to mix thousands of units with the micromanagement of base building and resource management has some interesting ramifications. American Conquest combats the stress of dealing with both massive combat and base management by simplifying both aspects to a degree where they are manageable without sacrificing depth. Instead of forcing you to micromanage a supply chain to deal with the harvesting and collection of the game's six resources, you build mines to automatically collect metals, assign workers to hack at trees that never really fall, and tell peasants to pick grain from a gigantic field sowed by a simple click on a granary.

American Conquest does add a nice artistic touch to this simplified harvesting and collection format: When a field is sown, the crops grow into individual plants. The peasants then pick the individual plants, causing them to disappear one by one from the field, as though they are really being picked. However, the fields don't affect unit movement or strategy the way cutting down trees would open defensive holes in other games, nor in American Conquest are you forced to constantly worry about resource depletion, which eliminates some of the micromanagement.

Another welcome simplification in American Conquest is that you can select as many units as you desire at once, which allows for broad tactical maneuvers without the micromanagement. Groups, naturally, can still be formed, but now they can hold giant armies of hundreds of units instead of the usual 10 or 12. Units can also be fortified in any building to provide defense and to gain a defensive bonus, eliminating the need to worry about special defense structures. Historically, it makes a lot of sense that units like American militiamen could attack from inside granaries or forts--after all, much of the Revolutionary War was basically guerilla combat. Buildings, peasants, and artillery can even be captured by your opponent if you aren't careful to defend your possessions through fortification.

Though it's been done before, the method of creating units in American Conquest is not the RTS norm--you send peasants to your fort, this game's equivalent of a town hall, and train peasants into units. Controlled through an officer unit, groups of 15 can be organized into traditional formations that even use drummers and flag-bearers. The three available formations are square, line, and rank (also called column). In practice, these formations work mostly automatically, and the groups of 15 units stay together in formation even in larger groups or selections until broken, leaving you to strategize and handle base building without being hung up so much on unit orders. Remember, American Conquest aims for huge battles, not personal, micromanaged skirmishes like Warcraft III does.

When compared to traditional RTS games, what keeps American Conquest interesting is that the game has actually been sped up to allow for building so many units and such massive armies. You can create entire squads of a dozen units in a matter of a few seconds instead of a few minutes. And it's even easy to put in the order for the units--holding shift and clicking on the desired build button will queue five units at once. Upgrades and advancements have also been vastly simplified, and you no longer have to worry about a convoluted tree of technology. Each building contains a few simple advancements, and you'll never have to worry about upgrading your main building, like some games require, before you can access certain units or upgrades. There is also an option to play the game in "fast mode," which speeds up all aspects of the game even further, putting everything into high gear, including unit speed, building, and attacking.

Even though the game is in isometric 2D, the art and animations are shockingly good and detailed. The game's attention to history is especially evident in its unique and realistic choice of units. Units include some of the more unusual and obscure period military units like flag-bearers, militiamen, and drummers, mixed with traditional units like commanders, soldiers, musketeers, priests, cavalry, and artillery squads.

Even if 2D is showing its age, it makes up for its weaknesses with detail. The units all sport gorgeous, colorful costumes, and effects like gun blasts and artillery explosions are satisfying and massive, even for 2D. The animations are also fluid and smooth, and you can even see musketeers switch from their guns to swords when they enter close-quarters combat. The maps themselves tend to be colorful and varied, especially the beautiful buildings from the colonial period, and the mapmakers have taken seemingly great pains to position columns of troops and units in lifelike formations. Another interesting visual addition is messages that appear over the units during battle. For example, if an outnumbered group of Native Americans face off against a French army, little messages like "I want to go home," "Save yourselves," or "They're stronger than we are" appear right over the units in battle to add a touch of personality and humanity.

Missions in American Conquest play much like missions in other strategy games, though naturally with an added historical element. Set during the 300 years between Columbus' discovery of the New World in the 15th century and the American Revolution in the 18th century, the campaigns are based on historical scenarios. For example, you can play as the Spanish fighting the Native Americans during Columbus' initial explorations, the French during the Seven Years' War, or the Americans in the Revolutionary War. A deep diplomacy model that incorporates trading with neutral factions for resources and units is also planned.

In all, you can pick from nearly a dozen nations, including major European powers like the English, French, and Spanish; Native Americans like the Aztec, Inca, Mayan, Algonquin, Huron, Delaware, and Iroquois; and the Americans themselves. American Conquest features four single-player campaigns with a total of 30 missions, as well as additional scenarios, one-shot historical battles, and even a random map generator. Mission objectives can consist of anything from meeting harvest or gold quotas and staying alive for a set duration, to simply defeating the enemy. And there are even long factual introductions to each historical mission. Through the mission, your units will gain experience and new abilities (as will enemy units, if you let them live), and morale also plays a part in unit strategy.

Various multiplayer modes for up to seven players are planned, though we weren't able to experiment with them. Specifically, American Conquest plans to include traditional deathmatch, online historical battles, a "battle for America" mode, and automated Internet championships with a global ranking system. In the "battle for America" mode, players will compete for continental territory modeled after real locations. The automated Internet championships will allow for automatically arranged competitions, score tracking, and in-game ratings, all similar to systems used in the developer's previous game, Cossacks.

American Conquest is scheduled for release at the end of this year in Germany. We'll see if the developer can juggle both size and depth when the US version of American Conquest ships this spring. 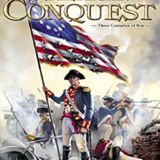