Tunche even has A Hat In Time's protagonist, Hat Kid, as a playable character.

This week's Indie World Showcase from Nintendo had plenty of games to show off, but Tunche from Peruvian developer LEAP was one of the highlights. Animated with hand-drawn art and inspired by Latin-American mythology, Tunche is a beat-'em-up roguelike set in the Amazon rainforest. In case you missed it, you can see the trailer for the quirky adventure game below.

Tunche's story can also be played in four-player co-op, and its combat system is described as having a "stylish" grade system, not too dissimilar from Capcom's Devil May Cry series which pushes players to earn SSS-rank scores during enemy encounters. Taking control of Rumi, Qaru, Nayra, or Pancho and beating down an army of minions will eventually result in players facing off against one of the fantasy beast boss monsters who have become the masters of their jungle territory.

Players can also uncover more backstory for each of Tunche's main characters, who all have specialized rooms that can be discovered in levels. Once a player enters a Story Room, they read a short comic that has been drawn and painted by one of LEAP's artists, which tells a chapter in the life of each hero.

Tunche will be released on the Nintendo Switch on March 23, 2021, and also features a crossover appearance from A Hat In Time's protagonist, Hat Kid. 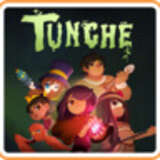