All Zombies Must Die Hands-On Preview

We got to play through Doublesix's latest undead shooter at MCM Expo and pick the brains of the developer itself.

The developer of All Zombies Must Die, Doublesix Games, has said its game is perfect for a Wednesday night in--when you invite your friends round and want to have some multiplayer fun. Playing the game at the developer's MCM Expo stand, it's clear why.

With four-player local multiplayer (there is no online multiplayer), this game is designed to be played locally with friends. Described as the spiritual successor to Burn Zombie Burn, it's an isometric shooter role-playing game that screams nostalgia. Playing as one of the four main characters--Jack, Rachel, Luxo, or Brian--you embark on the hub world, completing a variety of different quests.

Each character has a tale to tell, with Jack, the classic teenage gamer geek, waking up in the zombie apocalypse. Rachel, Jack's ex-girlfriend, dumps him because of his gaming addiction but now finds herself needing the benefit of his years of gaming experience to survive the zombie onslaught. Luxo and Brian find themselves intertwined--Brian needing to collect zombie brains for his scientific research and Luxo the alien required to collect items that will let him learn the lingo.

All Zombies Must Die oozes personality and is filled with references to classic zombie movies and games. The game is littered with environmental elements that have an effect on enemies. Power cables electrically charge zombies, while nuclear pollution turns them into super-zombies if they aren't killed quickly.

Each gun feels unique: shotguns blast enemies to a pulp, while the SMG provides an effective spray of bullets. One thing the developer is quick to emphasise is the deliberate inclusion of friendly fire, meaning you have to be careful with your ammo. If you're not, Doublesix says filling a teammate with lead initiates a deathmatch between you.

Each character has a main weapon and power in the game. Jack, the character we got a chance to play as, roams around with a shotgun and unlocks the ability to set zombies on fire. All characters can also equip a secondary weapon, ranging from Uzis to katanas. The ability to customise guns to increase the probability of certain weapon effects adds another level to the RPG elements of the game. Being able to increase the likelihood of your bullets giving enemies an electric shock or releasing a shock wave means you can choose how to play. Weapon status effects can be applied to any weapon, meaning you don't have to become too attached to a particular gun.

The game provides what looks to be a strong narrative throughout the campaign, and you're always fed tasks to complete. By killing zombies and completing these quests, you gain experience to level up your characters, increasing either health, attack, defense, or speed, so you can effectively build your own character classes. We had a blast playing All Zombies Must Die at MCM Expo and look forward to its full release on the PC, Xbox 360, and PlayStation 3 later this year. 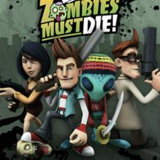 View Comments (8)
All Zombies Must Die!