Acclaim launches an official site for its upcoming sports game.

Acclaim has today launched the official Web site for All-Star Baseball 2004, which is currently in development for all three current console platforms, as well as the PC and GBA. According to Acclaim, All-Star Baseball 2004 boasts no less than 81 features that weren't in the 2003 edition--details of which can be found on the official site. Other sections on the site include player bios, game screenshots and movies, and an interactive tour that allows visitors to click through in-game menus concerning roster management, free-agent negotiations, position analysis, and the like.

All five versions of All-Star Baseball 2004 are currently scheduled for release next month. For more information, check out our previous coverage of the game using the links to the right. 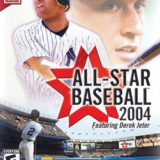