Alien Shooter: Vengeance is an action role-playing game that's sort of like Diablo, but with guns and aliens instead of swords and sorcery.

If you've ever played Diablo and wondered what it would be like if your character used machine guns instead of swords and sorcery and you battled aliens instead of demons, then Alien Shooter: Vengeance may be the game you've been looking for. This action role-playing game from CDV and developer Sigma Team features a look and feel that's similar to Diablo, but it has a sci-fi setting that's reminiscent of something closer to the movie Aliens. We had a chance to check out a late version of the game in development to see what it involves.

Set approximately 100 years in the future, the game is about how a megacorporation's dabbling with fusion power opens up a dimensional gate that allows an alien race to invade Earth. Your job, of course, is to fight them using shotguns, submachine guns, assault rifles, and other high-tech toys. You'll play as one of six premade characters. There are three males and three females, and each has a separate backstory and beginning skill set. For instance, there's a former SWAT commander who's an ace marksman, a spoiled rich girl who joined the Army and is an expert in hand-to-hand, and others. You'll get to select a specific perk, such as night vision, hypnotist, and even vampire, which lets you drain enemies of health and add that to your own. Then you can distribute a handful of points to your character's various attributes, such as strength, speed, and health but also including accuracy, proficiency with various weapon types, and more.

After character creation, you're dropped right into the first level, and the look and feel of the game should be familiar if you've played Diablo, Titan Quest, or any other action role-playing game. You control your character from a top-down, third-person view, and you use the keyboard and mouse to move around the level and attack. One of the first things that hits you about the game is the impressive atmospheric effects, in particular the real-time lighting and shadowing. Your character has a built-in flashlight attached to his or her suit, and the light from the beam interacts with the environment in a coolly realistic way. Walk up to a bunch of foliage and you'll see the light interact with the leaves, or come across a bench and see the shadows stretch depending upon the angle of the light.

The first mission involves you figuring out a way into an underground facility and linking up to the friendly forces fighting inside. There's a fair amount of rudimentary puzzle-solving, such as finding access keys to unlock certain doors. The bulk of the game, though, is pure action, as you'll have to blast your way through endless swarms. The aliens themselves feel inspired by the insectlike critters of Aliens. If your character is equipped with any kind of firearm, simply point and click to shoot at a target, and the game does all of the math as it calculates the shot based on your character's accuracy and skills. Then again, you can also simply hold down the fire button and unleash a steady stream of fire. If you have something like a submachine gun, you can continually mow down incoming opponents, though you'll often be attacked from multiple directions, which makes for a frantic fight as you constantly swing around to take out whichever enemy is closest. Meanwhile, you can use the environment to your advantage whenever possible. Doorways offer chokepoints that are easy to defend, while those explosive barrels that tend to show up in games are in abundance here. Blow one up at the opportune moment and you could take out a host of foes.

One of the game's conventions is that you can't save in the middle of each level, but you do have a limited number of lives, so if you die you'll instantly respawn if you have a remaining life. Aliens will drop power-ups such as ammunition, health packs, and extra lives, which you can pick up but which disappear after a brief period of time. This lends the game a strong action arcade feel. The role-playing aspects of the game kick in whenever a character amasses enough experience to level up, at which point you can distribute additional points to various skills. You can also customize your character's loadout by selecting which types of weapons to take along, as well as what armor to wear. These items can be recovered throughout the game, either through the process of discovery (finding an armory, for example), or by purchasing them at various stores.

In addition to the single-player campaign, Alien Shooter: Vengeance has a couple of extra modes. First, there's survival, which is sort of a one-man-stand mode in which you have to survive as long as possible against incoming aliens. Your character starts at level one and levels up through this mode, which gives you bigger and better weapons. Then there's a multiplayer mode that offers cooperative and competitive gameplay in the forms of deathmatch, king of the hill, arena battles, and more. That's a fairly substantial multiplayer suite to go along with the single-player game. Alien Shooter: Vengeance feels like a fast-paced action role-playing game with plenty of blood and gore. It is scheduled to ship later this month. 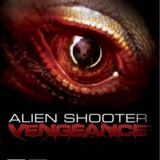