We take a whirl on Acclaim's upcoming skatefest, Aggressive Inline for the Nintendo GameCube.

Aggressive Inline surprised quite a few people with its intense gameplay and deep control when it debuted on the PlayStation 2 not long ago. We recently had a chance to play a relatively early version of Z-Axis and Acclaim's GameCube version of the game, which is set to release this August. Aggressive Inline's translation to the Nintendo system brings with it the same levels, characters, graphics, and gameplay of the previous versions, and it is shaping up to be a faithful rendition of the well-received original.

Aggressive Inline's playable characters are a blend of real-world inline skating celebrities and a number of original characters. Heading up the roster are 2001 X Games street champion Jaren Grob, 2001 Gravity Games and X Games vert champion Taïg Khris, Shane Yost, Franky Morales, Matt Lindenmuth, Sam Fogarty, Sven Boekhurst, Matt Salerno, Eito Yasutoko, and Chris Edwards. In addition to these pro skaters, the game starts players off with access to a pair of original female characters, Chrissy and Jordan. Chrissy is one part stereotypical schoolgirl and one part adolescent male fantasy, complete with pigtails, a tied-up shirt, and a revealing skirt. Jordan is the more believable character, with a tight-fitting shirt and big, baggy pants. Both of the female characters, for what it's worth, feature the jiggly motion effect that was popularized by the girls of Tecmo's Dead or Alive and Mai Shiranui of the King of Fighters games. Other, more bizarre characters can be unlocked with extended play, including a Bride of Frankenstein-type and a peg-legged pirate with a single wheel on the end of his prosthesis.

Each skater is ranked in seven different categories, each of which is attributed to a relevant ability. As skaters progress through the game's single-player career mode, they can improve their stats in jump, speed, spin, grind, manual, fakie, and wall ride. While these stats may seem familiar to anyone who has played one of the recent Tony Hawk's Pro Skater games, Aggressive Inline truly starts with the typical gameplay and control of the extreme sports genre and takes them to a new level. Features that are expected to appear in the next generation of Tony Hawk games are already being used in Aggressive Inline, including the ability to talk to characters you encounter in a level in order to get new objectives. Also available to skaters is the ability to skitch, or ride behind cars by holding on to their bumpers, as was available in Jet Set Radio Future. The depth of control in Aggressive Inline allows for some fairly spectacular moves, including vaulting over waist-level obstacles and swinging around vertical and horizontal poles, much like the protagonist from Airblade. Aggressive Inline also integrates the abilities found in most modern extreme sports games that allow players to extend their runs, including manuals and cess slides. The cess slide transitions into four different types of manuals, depending on whether your character is facing forward or backward, and it is the key to transitioning between vert tricks and manuals for extended trick combos.

Playing with these characters in the game's career mode will allow you to improve their basic abilities. The way these stats are increased is similar to a modern RPG system, as it is truly an experience-based process. As you maneuver your skater around a park, the CPU keeps track of which maneuvers and tricks you pull off and rewards you accordingly. Pulling off many different vert tricks will raise your jump and spin stats, while extending long rail runs will raise your grind statistic. Thus, your skater's attributes will grow in a direction that suits your personal play style, or you can tailor your skater in such a way to compensate for your weaker abilities.

Instead of the typical timed runs of other extreme sports games, Aggressive Inline instead uses a "juice meter" that functions much like the special meter found in the Tony Hawk games. Each run begins with an already depleting juice meter that fills as you successfully perform tricks. When the juice meter is maxed out, your skates leave trails of sparks and fire in their wake and tricks are generally more impressive--you'll catch more air, or be able to pull off longer grinds with ease. The speed really picks up when you're in this zone, and your skater will seem to almost fly across rails. Since you can continue to pull off tricks to keep your juice meter full, a capable player could theoretically continue extending his or her run indefinitely.

The number of tricks and moves at your disposal during any given run is almost overwhelming--you can grind on virtually any rail or edge, and you can hop from rail to rail, linking grinds together over gaps, extending their lines. Grinds can be maintained for a very long time, especially since you're able to switch between different grinds, which auto-corrects your balance. When it seems like a particular line is finished, you may be able to hop off at the right angle to swing around a lamppost, further extending the trick. You can skate forward or backward, switching back and forth with the Z trigger, and switching between them lets you access different sorts of manuals and tricks. And, of course, there's a wide variety of spin and grab moves that can be pulled off to rack up the points, which in turn will unlock more levels. Each grab move can also be tweaked at its peak, in effect doubling the number of moves available in the game. Also helping you keep your tricks going is the ability to save yourself from a bail by pressing the X button--a very useful feature for the gravitationally challenged. Some of the inline skaters' moves are considerably over the top, but their real-life counterparts can actually pull some of these things off, including spinning flips and other hair-raising maneuvers.

There may be only seven different levels in the game, but you'll have plenty to do, as each individual stage is absolutely enormous, with plenty of areas to explore and objectives to uncover. Every level features many different lines and ramps where tricks can be pulled off, and they also include triggerable event sequences that open up additional areas in each level. We spent some time in the Movie Lot stage, which drops you in a prototypical Hollywood set, including the busy street in front of the lot, as well as an immense stage area. Once we proceeded past the loading area and made it to the stage, we were able to skate through a makeshift set backdrop, an expansive chasm, and even a haunted graveyard set. Grinding across the branches of the large tree on the set made the tree grow, opening up new areas. Crazy lines were everywhere for us to grind across, including many different tracks and rails for different movie set carts, handrails along nearly every wall, and even the rigging suspended from the ceiling. The other levels that you'll be able to explore are the snowy streets of Civic Center, complete with cable cars; the spark-ridden machinery mess of the Industrial level; the festive Boardwalk; the salty-flavored Cannery; the open-air Airfield; and the prehistoric nostalgia-fest of the Museum.

Even more importantly, as you continue clearing the objectives in each level and exploring newly unlocked areas, parts of previous levels will be unlocked in a way that reveals new areas and other bonuses. So instead of linearly progressing through each stage after reaching "100 percent," Aggressive Inline encourages you to proceed through a stage, do as much as you can, and then revisit it later to see what you've unlocked. This backward-and-forward thinking in regard to hidden areas and secrets encourages you to replay each level, unlocking new areas and a multitude of secrets each time around.

Aside from the single-player career mode, you will be able to participate in a timed run mode and a free skate session for exploration purposes. The included skate park editor is worth noting as well, as it includes a wide variety of different pieces and utilities for building countless different types of skate parks. Simple, intuitive controls for terrain depth and geometry placement will allow you to throw together a fairly nifty fun house park with a minimum of effort.

Aggressive Inline even looks great, with characters that are composed of approximately 4,000 polygons and smoothly animated. There are nicely done reflections in the pools of water and across certain reflective surfaces. The sparks and flames coming off the skates make for a fairly interesting effect, and the game leans heavily on the side of camp--in fact, you can see Z-axis' sense of humor in much of the hidden stuff that is revealed through gameplay. The levels are even more impressive, as they are truly expansive and richly detailed. You can see tons of stuff throughout each environment, and most of the geometry can be used for a trick, whether it's a rail for a grind or a ramp for the pursuit of bigger air. Perhaps most impressive is that no matter how much activity is going on onscreen, the game never slows a bit, maintaining a constant whiplash-inducing frame rate.

Also confirmed for the GameCube version of the game is an eclectic soundtrack that mixes genres and musical styles in a most bizarre manner. Recording artists contributing tracks include Pharcyde, Black Sheep, The Vandals, Saliva, The Ataris, Hoobastank, Student Rick, Eric B. and Rakim, Boy Hits Car, Reel Big Fish, P.O.D., and Sublime.

Aggressive Inline wowed audiences when it first debuted on the PlayStation 2, and it looks like the same gripping gameplay and engaging level mechanics have been translated over flawlessly to the GameCube version. GameCube owners who weren't enamored with Tony Hawk's Pro Skater 3 may want to check Aggressive Inline out when it's released on August 12. 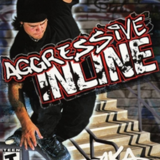