We meet with Majesco and get our first look at Terminal Reality's upcoming movie-inspired action game.

First announced back in April, Terminal Reality's Aeon Flux is a third-person action game for the PlayStation 2 and Xbox, inspired by the upcoming Karyn Kusama movie of the same name. In case you're not familiar with its futuristic subject matter, the movie is, in turn, based on Peter Chung's animated series of the same name, which appeared on MTV's Liquid Television in the '90s. The upcoming movie is set some 400 years after the events of the animated series, while Terminal Reality's game will essentially bridge the gap between the two--ending almost exactly where (and when: the year 2392) the movie gets under way. We recently had our first opportunity to check out a work-in-progress Xbox version of Aeon Flux and are pleased to report that it looks promising.

In Aeon Flux, you'll assume the role of the titular female assassin who, based on what we saw of the game during our presentation, is one of the most nimble and acrobatic characters ever to appear in a video game. The first sequence we got to see tasked Aeon with locating, reaching, and reprogramming a number of futuristic billboards being used to send subliminal messages to the unsuspecting populace. It was difficult for us to discern whether or not the route that the Majesco representative playing the game took through the level was linear, or whether he had the freedom to explore; what's certain is that negotiating the expansive city required all manner of acrobatics from our heroine.

As we watched Aeon effortlessly run along walls, swing on poles, and jump between platforms, we couldn't help wondering if the game was being made to look much easier than it actually is. Purportedly that's not the case, as we were told that the acrobatics, although spectacular looking, are actually very simple to perform. Some of the enemies whom Aeon encountered on her travels between billboards didn't put up much of a fight, particularly when Aeon was able to get within striking distance of them undetected and hit a single, context-sensitive button to kill them by, for example, grabbing them between her legs and hurling them from a tall building.

When enemies are alerted to Aeon's presence, you'll be able to fight them using her considerable hand-to-hand skills, as well as a number of different (and suitably futuristic) ranged weapons. In addition to Aeon's health meter, you'll notice that the upper-left corner of the screen hosts a style meter that fills up as you perform moves that are especially showy. When the style meter is full it'll afford you some kind of devastating special attack, which is something that Aeon has no shortage of in her arsenal. One particularly memorable attack that we got to see on multiple occasions, for example, had her jumping onto the head of an enemy, planting a "spider bomb" on it, and then leaping high into the air just in time to avoid the subsequent explosion.

Aeon's acrobatic prowess also came in handy later in our presentation, when she was attempting to infiltrate a research laboratory protected by a security system of lasers and gun turrets. The lab gave us an opportunity to check out Aeon's "orb"--a futuristic gadget that's essentially a radio-controlled ball you can use to interface with security systems and the like. After leaving Aeon somewhere safe, you'll be able to take direct control of the orb and explore your surroundings for sockets where it can interface. Inside the lab, for example, the orb was used to deactivate a security system and then, via a reasonably well-hidden socket, take control of a gun turret that was subsequently used to mow down a couple of enemies.

Other gadgets in Aeon Flux will include a Metroid-style ball, known simply as a "container," that you can climb into and roll around in, and a grappling hook. You'll only be able to use the grappling hook in certain areas, which would make it feel redundant as a gameplay mechanic, if it weren't for the fact that you're able to shoot at enemies while suspended from it. We were also told that some of the grappling hook-based mission objectives in the finished game will require some semblance of skill to complete--hitting a button at the exact moment you hit the floor to retrieve an item, for example.

Aeon Flux will feature seven episodes for you to play through, and although they'll all be part of the same story arc, we're told that they'll also work as self-contained stories. In one of the episodes, for example, a key character named Trevor will be your husband, while in another he'll be your archenemy, who is secretly experimenting on corpses.

Aeon Flux is currently scheduled for release in November. We'll bring you more information on the game as soon as it becomes available. 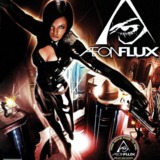