Cartoon Network Show getting DS game later this year from the studio behind Silent Hill: Book of Memories and Aliens: Infestation.

Adventure Time with Finn and Jake is leaping from the television screen and onto the DS, according to series creator Pendleton Ward.

Through a series of tweeted doodles, Ward revealed last night that he would be working "so closely" with WayForward Technologies to develop a DS game based on the Cartoon Network show. Details are thin on the project, but Ward said the game will ship in 2012.

Adventure Time for the DS will not be the first game based on the TV show. A series of Flash games are available through Cartoon Network's website.

WayForward is currently at work on Silent Hill: Book of Memories for the PlayStation Vita. The company's previous work includes Aliens: Infestation, A Boy and His Blob, and BloodRayne: Betrayal. 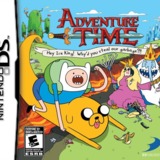