We take a first hands-on look at Advance Wars: Dual Strike for the Nintendo DS.

We had a chance to get a hands-on demo of Advance Wars DS from the Nintendo booth at E3 2005, and here are our first impressions of the game in action, including a look at the new real-time battle mode in which you can go head-to-head against the computer or another player.

The aspect of the game that Nintendo is pushing is definitely this new battle mode, which is the unique addition for the DS version of Advance Wars. Although it's visually similar to the standard turn-based battling of the older games, the real-time play seems to be, well, faster paced and more frenetic than the standard gameplay mode. When you start a game, you'll be asked to make an army, consisting of the standard units of the game. After starting up, you'll be able to control only one unit at a time, while the computer is able to throw many units at you. You're going to have to act quickly here, as the computer will indeed attempt to find cities and capture them as soon as the game starts. They aren't quite as aggressive as you can be when it comes to hunting down and destroying your unit, though, so you should have a bit of flexibility when it comes to pursuing the strategy you want to use.

In the battle mode, you can win either by destroying all of your enemies' units or by capturing their home city. From what we played, it seems like destroying the units will be a bit easier than going for the home city; even if it seems counterintuitive, the enemy appears to focus on capturing cities, allowing you to pound away on its units. It should be noted that we saw only the first couple of maps, though, so it's almost certain that the difficulty will be ramped up as you proceed. Some maps even feature fog of war, preventing you from seeing the actions of your enemy except in a limited field of view in front of your unit.

We'll have more details on Advance Wars DS, including more info on the intriguing new battle mode, so keep your eyes on GameSpot for more info as it becomes available. 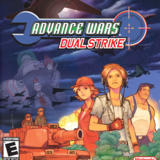