Activision's recent wheeling and dealing has netted the company a superspy and a superbabe. Just weeks after acquiring the rights to the James Bond license from Electronic Arts, the company has signed on another big-name license--albeit one on the opposite side of the spectrum.

Santa Monica, California-based Activision today announced that it has signed a multiyear agreement with toy company Mattel to make games based on the world's best-selling doll, Barbie. The license was previously held by Vivendi Games. Five games have been announced to fly under the Activision banner as part of the deal. Two of the games will be all-new and are expected to be released this fall, and three will be reissues of previous Barbie titles.

The Barbie Diaries, released earlier this month on DVD, will be the foundation of a new PC and Game Boy Advance game, and Barbie in the 12 Dancing Princesses will be the setting for a new PlayStation 2, PC, and GBA game. The three rereleases include Barbie Fashion Show, Barbie and the Magic of Pegasus, and Barbie Beauty Boutique--no specific platforms were mentioned.

No pricing or rating information on any of the games has been released. 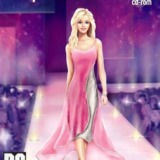