Initial batch of Nintendo-centric games due this holiday, will include Little League World Series 2008, Rapala Fishing Frenzy, and Dancing with the Stars.

Although some independent developers are trying to open a conduit of "core" games to the Wii, most major third-party publishers have been content to embrace the console's casual emphasis. This morning, Midway announced a sequel to its Game Party minigame compilation, and Ubisoft recently announced a posterior-powered, third Rayman Raving Rabbids title.

Electronic Arts has gone several steps further, giving all EA Sports Wii titles a pick-up-and-play option and incorporating Miis into select games such as FIFA 08. The megapublisher also rejiggered its multibillion-dollar Sims franchise for the console in the form of MySims, and has released the minigame compilations EA Playground and the rhythm game Boogie.

Today, EA's archrival Activision announced it, too, will be putting greater emphasis on Wii development. Less than a day after its shareholders overwhelmingly approved a merger with Vivendi Games, the soon-to-be half of Activision Blizzard revealed a new Wii-specific label called Wee 1st.

"The Wii is introducing new audiences to gaming," said Activision Publishing's Dave Oxford. "Clearly, the Wii's accessible controls are changing how the audience plays games and how we look at game design. This initiative is designed to showcase games that take full advantage of the Wii's capabilities."

Unfortunately for those impartial to casual games, Activision appears to be taking the same tack as its competitors. The first wave bearing the Wee 1st label, due in the fourth quarter, includes the less-than-hardcore Little League World Series 2008 and Rapala Fishing Frenzy, as well as the TV tie-in Dancing with the Stars: Get Your Dance On! However, Activision did say more holiday titles "will be announced in the upcoming weeks." That raises the possibility of new games being unveiled at the publisher's media event being held alongside--but not in conjunction with--the E3 Media & Business Summit next week. 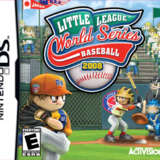