The past several weeks have seen a steady stream of dreary financial results, with THQ, Sega, Sony, and Electronic Arts all announcing losses and layoffs. However, several companies have issued positive earnings reports, including Ubisoft, Take-Two, and Nintendo. 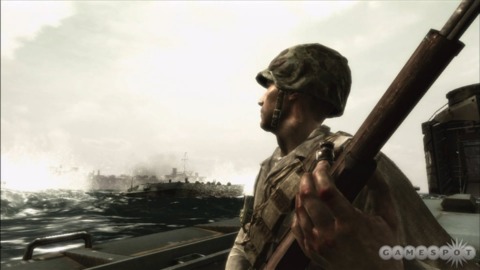 Today, the biggest third-party publisher of them all, Activsion Blizzard, weighed in with an earnings announcement that's both good and bad. On the one hand, the company's record $2.3 billion in October-December net revenue beat the $2.15 billion a Thomson Reuters survey of analysts had predicted. On the other, the company posted a $72 million loss during a quarter when it launched new entries in its three biggest franchises: Guitar Hero World Tour (October 26), Call of Duty: World at War (November 10), and World of Warcraft: Wrath of the Lich King (November 13).

Activision Blizzard CEO Bobby Kotick played down the loss with a backhanded dig at staff-cut-beset competitors. "We won't be distracted by layoffs and restructuring and things that other companies are going to be distracted with," Kotick told Reuters. "We don't respond to managing our operating expenses because there's a financial crisis, we do it all the time."

Despite Kotick's upbeat tone, the markets reacted swiftly and negatively. In after-hours trading, Activision Blizzard's stock was down over 5 percent, trading at $9 as of press time.

Speaking with analysts in a conference call, Activision Blizzard CFO Thomas Tippl said that the company may take advantage of the dismal economic climate to add talent to its internal roster. "A long, challenging economic environment may provide acquisition opportunities due to strong cash position," he said. According to Kotick, Activision Blizzard currently has over $3 billion in cash reserves with zero debt load.

[UPDATE] Looking ahead, Activision predicts revenues of $4.2 billion for the full 2009 calendar year (not the current fiscal year, as was initially reported). The company said that figure included $600 million in downward revisions--$400 million due to a stronger-than-expected US dollar and $200 million "from the company's lower margin distribution and the co-publishing businesses."

In a conference call with analysts, executives noted the $200 million revision was in part due to the delay of the next James Bond game. The title, rumored to be a driving-centric game from Bizarre Creations, is being pushed back into calendar year 2010 "to avoid head to head competition with Call of Duty: [Modern Warfare 2.]"

[UPDATE] Highlights from the conference call are listed below:

--DJ Hero reconfirmed as coming out in 2009 on a variety of platforms, with the Wii specifically mentioned; no price point yet.

--2009 will see a new Tony Hawk game on the Wii. It is unclear if the game will be the widely rumored skateboard-peripheral-based Tony Hawk's Adrenaline.

--Upcoming Tony Hawk again described as being radically different. "We said we would reinvent this franchise from the ground up and we've developed an interactive approach for Tony that should allow us to broaden the appeal of skateboarding beyond the core to mass market audiences," Activision Publishing president Michael Griffith told analysts. "More details later for competitive reasons."

--Yet another Guitar Hero game coming to DS. No word on whether it will use the Game Boy Advance slot, which the forthcoming DSi does not have.

--New racing game from Activision-owned Bizarre Creations confirmed by year's end. Again, no details for now "due to competitive reasons."

--Starcraft II beta test will begin "in the next few months." No launch date yet.

--Guitar Hero "installed base" now tops 32 million worldwide. Executives later clarify that this figure is the total number of Guitar Hero units sold worldwide and doesn't take into account multiple guitars and games owned by the same person or in the same household.

--The PS2 edition of Guitar Hero: Metallica will trail the other versions, due in March, by several months.

--Activision says its continued support of the PS2 will depend on whether Sony cuts the console's price down the line.

--Tippl admits Activision "could've done better on the cost front in terms of the launch of Guitar Hero World Tour." Says production issues raised the per-unit cost, and Activision is making adjustments to prevent the same problems occurring in the coming year.

--The sinking cost of petroleum--which is used to make the plastic in the guitars and drum kits--will also improve Activision's profit margins on Guitar Hero hardware in the coming year.