In 2006, Activision made the acquisition of a lifetime. After Guitar Hero became an overnight sensation, Activision picked up the game's publisher, RedOctane, along with the rights to the game, for a cool $100 million. In the years since, that Guitar Hero franchise has gone on to sell more than 22 million units worldwide, generating sales of more than $1 billion in the process.

The publisher would no doubt be thrilled with a fraction of that success coming from its latest acquisition, as today Activision Blizzard announced the purchase of music game-oriented studio FreeStyleGames. Fresh off its work on the critically panned rhythm dancing game B-Boy, FreeStyleGames has been charged with developing localized downloadable content for the Guitar Hero franchise and is also at work on a new intellectual property in the rhythm genre.

"Activision Publishing is the undisputed leader in the music-based games, and we see tremendous opportunity for continued growth, particularly in Europe," Activision Publishing president and CEO Mike Griffith said in a statement. "An important part of our European growth strategy is to work with local developers and provide music content that resonates with the market."

As per the terms of the deal, FreeStyleGames will remain headquartered in Leamington Spa, UK, and Activision Blizzard has signed on the company's current management to long-term contracts. Financial terms of the deal were not disclosed. 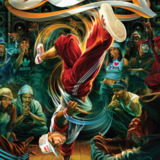