Activision CEO Robert Kotick calls wagering in games the "Holy Grail" of the business, says "it will happen eventually" but not anytime soon.

Gaming is more than just moving Mario around the screen to save a princess, saving the Earth from the Covenant, or driving down a virtual football field for a virtual Super Bowl title. Ask what "gaming" means in Nevada, the Caribbean, or Monte Carlo and there will be an entirely different definition.

Traditionally, gaming of the joystick variety and gaming of the gambling ilk haven't crossed paths. But with the onset of online play, new avenues of gambling-based revenue could easily open up for traditional publishers.

Speaking before investors at the Goldman Sachs Communacopia XV conference today, Activision CEO Robert Kotich was asked to what extent gambling will be part of the future of networked games.

Kotick replied, "There's great opportunity for wagering eventually... There's probably lots of opportunities to figure out how to develop prize play [and] cash play as a future growth opportunity. You're going to need a big installed base, and a very different regulatory climate. And that's going to take some time."

With each next-gen console having integrated networking capabilities, Kotick sees gaming for dollars as not just possible, but inevitable.

"When you think about the Holy Grail of the video game business, organized competition for prize play and cash play is going to be the floodgate of opportunity for new audiences," he said. "And it will happen eventually, but I wouldn't expect it anytime soon."

Online gambling has boomed in the past several years, particularly online poker on sites like bodog.com and goldenpalace.com. Activision is already cashing on the trend in one way, releasing the online-enabled World Series of Poker: Tournament of Champions this week on the Xbox 360, PlayStation 2, PlayStation Portable, and PC.

However, online gambling remains illegal in the US, which means most online casinos are based in foreign countries--an option not availalbe to the Los Angeles-based Actvision. Kotick's "regulatory climate" comment was also likely a reference to the federal government's ongoing crackdown on online gambling. So far this year, several executives of foreign online gambling services have been arrested while visiting the US on charges of taking bets illegally over the Internet. 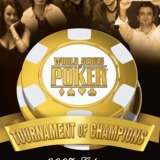