Acer's latest 43-inch gaming monitor, the Predator CG7, is a quality display with some disappointing drawbacks.

When it comes to PC gaming, you'll most commonly see people rocking setups with monitors no bigger than 27 inches. With how close people usually are to their monitors, this size is a good fit for most spaces. However, it's hard to deny the appeal of an even larger monitor, especially if your desk allows for that kind of room. The Acer Predator CG437K 43-inch monitor is a beastly gaming display, one that commands attention. It provides a great gaming experience that will be appealing to many PC gamers, though those who are already accustomed to HDR-capable 4K TVs may come away disappointed.

The Predator CG7's massive size is accompanied by a sharp 4K image that makes the finest details stand out. Whether I was playing on PS5 or PC, games looked clean. For example, the intricate designs of Demon's Souls armor and enemies are beautifully displayed, while Valheim's stark and simple art style is immediately eye-catching and shines brilliantly on the CG7's 4K VA panel.

The CG7's colors can be quite vibrant, too, though its viewing angles tend to let it down a bit. Facing the monitor straight on provides the best image, with bright colors popping off the screen stunningly. However, if you're off-center, you may notice darker colors start to wash out. This is the one area of the CG7 I'm disappointed with. The HDR performance is below par, and if you're accustomed to playing games on a 4K TV with good-quality HDR, you'll notice a big difference. Blacks are a touch washed out, while brighter scenes tend to feel too bright. It took me a while to tweak the settings to where I was happy, and even then, I was never quite satisfied with the image--I would often just play without HDR entirely.

When it comes to actually playing games on the CG7, it's a delight. Fast PC games like Rocket League look superb running at 4K and 120Hz (using DisplayPort input), and while there are no HDMI 2.1 ports, 60fps PS5 gameplay looks great as well. Playing shooters like Rainbow Six Siege and Call of Duty: Warzone feels fast and fluid, as responsive as you'd want for shooters. Competitive multiplayer feels viable on the bigger screen thanks to its high refresh rate, FreeSync, and G-Sync compatibility--granted you have the space to accommodate such a big screen. In my normal desk setup, where I use dual 27-inch monitors, the Acer CG7 was a bit too close for my own comfort. It caused some motion sickness due to how close I was to the screen. After finding a good spot for it where I had about five-to-six feet of space between my eyes and the screen, I had no issues.

The Acer CG7 is a beast of a monitor. It's big, heavy, and might be able to serve as a good replacement if Bugs Bunny ever runs out of fridges, safes, and pianos to drop on Yosemite Sam. Its weight and thick chassis also make it quite sturdy, with a solid metal stand that's as immovable as it is unadjustable. It's a great monitor if you're looking to keep it in one place and not move or swivel the screen, but because of this, it almost feels like it would be better used as a small TV for a bedroom.

At its thinnest--the top of the screen--the monitor is about an inch from front to back, but this widens as you move toward the center of the screen, getting as thick as four inches. The bezel around the screen measures in at 0.6 inch. As for its stand, you're looking at a width of 26.2 inches at its thickest from left to right and 10.5 inches from front to back. These measurements are definitely on the large side, though they're not too abnormal when it comes to monitors at or around 43-inches. The CG7 is a big boy, for sure, but while most monitors feel fragile, it's built like a tank.

The CG7 comes with a bounty of ports, too. Three HDMI 2.0 ports work well for consoles and PC, while its two DisplayPort 1.4 ports will help you push that 4K and 120Hz refresh rate limit on PC--the PS5 and Xbox Series X require HDMI 2.1 ports to take advantage of their 4K and 120Hz capabilities. It also has six USB ports, two of which are 2.0, three 3.0, and one type-C. It also features a set of menu buttons easily accessible right under the front of the monitor. It features a number of buttons and a plastic joystick for menu navigation. These controls aren't intuitive and, like the vast majority of monitors, take some time to get used to.

If you're looking at 43-inch monitors, you likely already know you're going to be breaking the bank to afford one. The Acer Predator CG7 is regularly $1,500, which is on the expensive side--its closest competitor, the Asus ROG Strix XG438Q, is more affordable at $1,100. For the same $1,500 price, you can get a 48-inch LG CX OLED 4K TV, which works surprisingly well as a PC gaming monitor thanks to its FreeSync Premium support, four HDMI 2.1 ports, and 120Hz refresh rate.

There's no doubt the Acer Predator CG437K monitor is an excellent display for gaming, but it does come with some caveats. Its HDR performance isn't able to deliver the experience that many games these days are designed to support. It's also quite expensive, even for a 43-inch monitor. I enjoyed my time with the CG7 and would be inclined to recommend it; however, its regular price makes it a harder sell compared to some of the other options on the market. 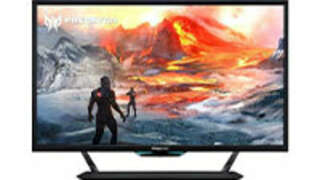