After 10 years, Dutch independent studio Vlambeer has closed its doors. Despite the surprise shuttering, the studio's last game, Ultrabugs, is still on the way.

"Today marks Vlambeer's 10th anniversary, which is way longer than we could've ever imagined," the studio tweeted. "We had a beautiful run, made incredible games, and worked with amazing people, but it's time for new things. So we're announcing the end of Vlambeer."

Vlambeer didn't specify what "new things" are coming for co-founders Jan Willem Nijma and Rami Ismail. Vlambeer promised that Ultrabugs is "still coming out" and said it's investigating other options for "further support for some of our earlier games," but nothing has been solidified yet.

Today marks Vlambeer’s 10th anniversary, which is way longer than we could've ever imagined. We had a beautiful run, made incredible games, and worked with amazing people, but it is time for new things. So we're announcing the end of Vlambeer. pic.twitter.com/jZ4dMGxNV2

Vlambeer was formed in September 2010, not long after Ismail and Nijma dropped out of game design school to pursue the craft on their own terms. The studio's first game, Super Crate Box, is a shoot-em-up that came out in 2010 and put the studio on the map. Vlambeer went on to develop Serious Sam: The Random Encounter and Ridiculous Fishing before its 2014 hit, Luftrausers, came out. One of Vlambeer's most notable titles, Nuclear Throne, released a year later to widespread praise.

Ultrabugs will mark Vlambeer's last game as a studio, though a release date has yet to be confirmed. As a celebration of 10 years, the studio is holding a massive Steam sale on games it developed and published. Additionally, a never-finished prototype called FFFLOOD has also been released as a thank you for supporting the studio.

It's not a sad day for us, but the happy conclusion to a whirlwind decade filled with screenshake. It feels like we've achieved what we set out to do - as a studio, as a voice, and as individuals, and we are extremely grateful for these past years. pic.twitter.com/rd66tifQo8 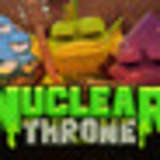