When they hear the names Mary-Kate and Ashley Olsen, most people think of the words "cute" or "perky." Some unsavory souls think "jailbait." Rarely, however, does "lawsuit" come to mind.

However, less than two months before their 18th birthday, the former Full House stars are engaging in some very grown-up legal action. Late last week, the television tabloid show Celebrity Justice revealed that the twin queens of 'tween media are suing Acclaim, former publisher of their Mary-Kate and Ashley game franchise.

According to the suit, which can be viewed in full on the Celebrity Justice site, Acclaim failed to pay Olsen-owned Dualstar Entertainment $177,966.32 in game royalties. The suit seeks the back royalties plus "maximum interest" and an additional $300,000 Acclaim was to pay Dualstar as part of a termination settlement reached last fall.

The termination settlement came after several months of behind-the-scenes legal wrangling between the two companies. According to a letter from the Olsens' lawyers, which was filed with the suit, the split came after the cancellation of Mary-Kate and Ashley in ACTION!, a GameCube, Game Boy Advance, PlayStation 2, and PC game scheduled for a fall 2003 release.

According to the letter, the game was canceled after Acclaim told Dualstar that the game's publication was "definite" while failing to pay the game's unnamed, "Seattle-based" developer $1 million. "As a result," said the letter, "Acclaim...has blatantly abandoned the mary-kateandashley brand and has taken the mary-kateandashley brand in video games which had flourished and has now run it into the ground." 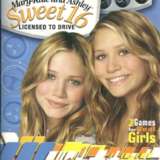