Eidos' Abomination: The Nemesis Project has all the makings of a modern-day apocalypse. There's a virus of plague-like proportions spreading across the US in six days, exceptionally powered-up government agents, the "end of the world" looming with no possible solution or antidote, and just about everything else developers could toss in - other than Charlton Heston.

The game is a real-time squad-based strategy combat title not unlike the X-Com games from Mythos and Microprose. Yet it is different in that Eidos may be hard-pressed to achieve the level of depth found in those titles - at least from what we've seen at this prerelease stage.

In Abomination, you command a team of eight special agents, each skilled in some unique way. This group has been trained and built, literally, through the black ops Nemesis Project. One team member is an explosives expert, another a key medical technician, and yet another a stealth component, while others are regular tough guys. Your goal is to develop their skills and then nurture the compatibility of the group as a whole, keeping in mind the dynamic of each operative's strengths and weaknesses. You'll also pick up new agents during gameplay and choose from an arsenal of about 150 distinct weapons ranging from the downright veritable to the unfamiliar and provisional gear.

Once you have determined your crew, you set forth on your missions. Ultimately, if you are successful, you will save your world from the ranks of an HP Lovecraft-style group known as the Faithful. The Faithful, which you face at the beginning of the game, has reacted violently to the plague. The group can be described as a doomsday cult that believes humankind will perish if it does embrace the Brood. The game's missions may require you to sneak into and take over your enemies' posts, execute intelligence missions to garner information or technology through use of spy tactics, or simply defend your own units from impending infiltration.

In multiplayer, you sacrifice some of the storyline for an all-out bloodbath. You'll be able to take on up to seven other players in a head-to-head mode, a campaign mode, or a team-up co-op mode. In the campaign mode, you and three other players work your way through the game, rotating players in and out and accepting new players along the way while holding to the base of four. Competitive multiplayer modes include arena battles, survival competitions, a capture-the-flag routine, a lone-runner mode, and a hold-and-destroy mode. You will play these levels over multiplayer-specific environments, as well as on the single-player turf.

Another feature Eidos is touting in the multiplayer section is the e-mail mission function. Simply put, it lets you send your saved games to others to try out. E-mail play (not an original concept by any stretch) will work in the single and the multiplayer mode as a campaign. (You complete a mission, then send it to player two, who will try, it send it to player three, and so on). The game files will be relatively small, according to developers, at about 100k each. If you choose not to e-mail, but want to share missions, you'll have another option as well, and that's to send a 12-digit access code to other players so that they can play the exact mission you had played, on their own.

Abomination is close to release, and the demo illustrates that Eidos has certainly attempted to fulfill the full-bodied strategy experience gamers have come to look for in games such as X-Com, as mentioned before. Will it do so? We'll know soon. 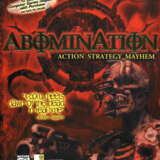