A Mandalorian-Themed Virtual Pinball Table Is Coming To Pinball FX3

Yes, baby Yoda will be in it.

Zen Studios is planning to release a Mandalorian-themed table for Pinball FX3, a pinball simulation video game, in Spring 2021. It's the developer's 20th Star Wars pinball table and will feature missions based on The Mandalorian's first season. You can undertake the missions in any order and will play from the Mandalorian's POV.

The table is set in the Razor Crest's cargo hold. It includes the following 3D characters and objects: the Mandalorian, the Child (aka baby Yoda), IG-11, the Razor Crest, Moff Gideon’s outland TIE fighter, and the AT-ST seen in the fourth episode.

Zen Studios has collaborated with the Star Wars series before and released Star Wars Pinball in 2013. It contained three tables centered around The Empire Strikes Back and Star Wars: The Clone Wars, and included iconic characters like Luke and Anakin Skywalker.

Pinball FX3 is the 2017 sequel to both Zen Pinball 2 and Pinball FX2. Brett Todd reviewed the original 2009 Zen Pinball for GameSpot and rated it 8.5/11. Todd praised the game's graphics and physics. He commented, "Don't expect any big surprises here. Even with the offbeat name, Zen Pinball is a straightforward simulation of the glitzy modern game found in arcades from coast-to-coast. You use the shoulder buttons to work the flippers, and you use the left stick to muscle the table into some extended bumper action. The physics are totally believable, so it really feels like you're playing pinball."

Pinball FX3 is available on Nintendo Switch, PlayStation 4, Xbox One, and PC. 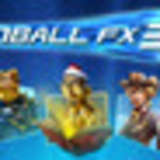