To The Rescue! is the heartfelt management sim for all the dog-lovers out there.

A new game called To The Rescue! is mixing adorable puppies with management simulation, tasking players with taking care of rescued dogs as well as keeping the shelter afloat. The game is being developed by studio Little Rock Games and published by Freedom Games, who have announced that To The Rescue! will release on Steam and Nintendo Switch in fall this year.

The game will include a lot of features common to management sims, tasking players with designing and building the shelter, running its finances, and hiring staff. However it'll also include the day-to-day care of the animals, including feeding, playing with, and medicating the dogs. Players will also be tasked with getting to know the personalities of both the puppies in their care and the potential adopters, making sure to suggest the right match for both parties.

"The challenges dog shelters and their volunteers face every day truly inspire us," said Olivia Dunlap, co-founder of Little Rock Games. "It's a setting we felt was ripe for exploration in games and we look forward to bringing this world to Nintendo Switch and Steam later this year."

To The Rescue! will release on PC and Mac via Steam, as well as on the Nintendo Switch. The game will launch at $19.99, with the studio pledging to share 20% of its profits with pet shelters in the real world. 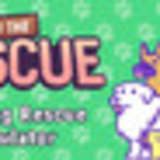 View Comments (2)
To The Rescue!