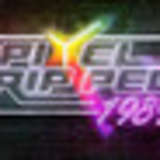 With many games paying homage to the nostalgia-ripe 2D-era of the '80s and '90s, Pixel Ripped 1989 seems like it could get lost in the crowd. But when it comes to reliving a bygone era, this strange yet surprisingly relatable throwback goes about things a bit differently, offering one of the most impressive and self-aware VR experiences in quite some time. During GDC 2018, we had the chance to go hands-on with the game ahead of its Oculus, HTC Vive, and PS VR release on May 22, while also speaking with creator Ana Ribeiro about its rather lengthy development.

"I started this as my final project in university for the master's degree program, and it was at a university more well-known for movies and stuff [National Film and Television School], and then when I put it on Oculus share, it got a lot of press," said Ribeiro. "People seemed to have liked it. It was more of a proof of concept to try and get a job, but then I decided to work on this game and get it a full release. It's been four years altogether. This is the dream. It actually has a lot of my life experiences in the game. I used to be a bad student, throwing paperballs, playing games in the background--it's all from a really personal place. "

Set in the late '80s, you're placed in the shoes of rebellious grade-school student Nicola, who loves to spend time on her handheld game system. Her favorite videogame is the action-platformer game Pixel Ripped, starring the blaster-wielding and platform-jumping Dot. When the evil Cyblin Lord's ambitions go beyond the realm of the videogame, he escapes into the real world, bringing familiar enemies along with him. To stop the main baddie, Nicola must guide Dot through increasingly difficult stages where she'll shoot monsters and other baddies--all while avoiding the gaze of her overbearing teacher and other distractions around the school.

As a game within a game, you'll be tasked with alternating between two different mechanics. In the world of Nicola's handheld, Dot controls in familiar style to a Mega Man game, where she'll blast enemies while traversing dangerous jumps and sketchy platforms to make it to the end boss. Of course, playing your videogame in the middle of class is asking for trouble, and Nicola's teacher becomes extremely angry when she catches you looking down at your game. In order to low-key get your game on and help Dot, you'll have to cause distractions around the classroom. Using spitballs, you can cause a ruckus to distract the teacher to keep your focus on the game.

Of course, many of these familiar tropes are mechanics wrapped up within the VR medium, which is what makes this particular game so interesting. What Pixel Ripped 1989 does well is center on the relatable experience of keeping your head buried within the game--while still trying to be aware of the real world around you. Balancing twitch-based platforming action when playing on Nicola's handheld system with perspective-focused controls that challenge your peripheral vision, it leads to some rather tense and humorous moments where you're trying to make a dangerous jump in Nicola's game, only to be caught by the teacher in the classroom at the worst possible moment. Eventually, there are moments in the levels where the 'game' will spill out, bringing together the two parallel game mechanics as you guide Dot through virtual constructs scattered around the classroom--all the while using Nicola's spitballs to open up pathways for the character.

In terms of mechanics, Pixel Ripped 1989 is a relatively simple game, but it makes some rather clever choices in how it presents those familiar and relatable actions in the VR experience. One of the most striking aspects of Pixel Ripped 1989 is its vibrant style, and the sort of exuberance that comes from being sucked into a good game. Going all in with the retro-80s aesthetic, the game features heavy doses of old-school charm with neon lights and chrome decals.

Pixel Ripped 1989 replicates much of the same escapist joy that came from playing videogames as a kid, while recontextualizing it as a different kind of VR experience. It's about what it's like being engrossed in a game--even feeling like your success in it can have consequences in the real world. For its creator, she aims to have Pixel Ripped 1989 be the start of a series of retro-themed games that focus on different eras of gaming, while also showing different experiences of the characters that play them.

"After four years I never get tired of this game. I always have fun working on it. Previously, I had some problems sticking to things, like working longer on things, but surprisingly after all this time, I'm not tired of it. I'm happy to do four more episodes of this game--this is first set in 1989--but after the success of this release, we'll do a Pixel Ripped 1978 set in the early arcade era with Atari graphics, 1983 will be arcades, 1985 would be the Mega-Drive, and then 1995 would be about the N64 era. We'll try to reference all the different eras of games."