7 Years After Its Reveal Trailer, Ray's The Dead Is Hitting PS4 And PC

Ray's the Dead was thought to be dead and buried, but now it has come back to life.

Ray's the Dead, first announced for PS4, PS Vita, and PC back at E3 2013, is finally coming out. Unfortunately, the Vita will miss out on the game--instead it will hit the PS4 and PC on October 22, with a Switch version to follow in 2021.

The game casts players as Ray LaMorte, a zombie who can gather up other zombies to form a horde and complete tasks. Think Pikmin, but with more exposed bones and brains. Along the way, Ray can find out how he died, and why he's come back as a member of the undead.

The game involves time travel and boss battles, and it will also be available on PS5 thanks to backwards compatibility.

It's been a long road for Ray's the Dead, but it's good to see the game finally releasing. You can watch the release date trailer below.

Ray's the Dead was originally funded on Kickstarter, where it earned $51,773 from crowdfunding. 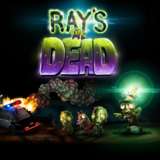