Loosely based on a true story, Konami's 7 Blades puts you in control of a skilled samurai detective out to quell a religious uprising. You'll come face-to-face with hordes of enemy warriors, skilled martial artists, and a heap of political backstabbers.

With the popularity of such games as D2, Metal Gear Solid, the Final Fantasy Series, and Tenchu: Stealth Assassins on the upswing, the cinematic gaming experience is finally garnering the respect and admiration of gamers and the gaming press. Mix some gameplay in with a rich story, and boom, everyone's hooked. Konami, seeking to cash in on this popularity while the cashing is good, is readying its own foray into the cinematic game genre with a game called 7 Blades.

The setting of 7 Blades is the 400-year-old man-made Japanese island of Dejima. And this is no ordinary island. While the history books lack any mention of zombies or mutations, the island of Dejima has quite a checkered past. In 1597, national ruler Toyotomi Hideyoshi, who disliked Christianity, ordered the expulsion of all priests from Japan. In an act that would be deemed heinous even by today's standards, 26 priests were executed atop Dejima's Nishizaka Hill. Later, in 1635, when the Japanese government began its period of national isolation, Dejima was set up as an intermediary island where Westerners were allowed. Two years later, a Christian uprising sent the island into a frenzy, resulting in the ultimate expulsion of all foreigners from Japan, and it was the last contact Japan would have with the outside world for 218 years.

Needless to say, Dejima's past allows for quite a bit of action and intrigue with respect to a video game environment. To bring about this action in a believable and engaging way, Konami has enlisted the help of filmmaker Hayashi Kaizo - a master film noir director whose credits include the emotionally haunting Umihoozuki (The Breath), the period drama Harukana Jidai no Kaidan O (Stairway to the Distant Past), and the samurai action film Jipangu (Legend of Zipang). Konami has given Kaizo creative control over the game's plot, action, and dialogue. In return, 7 Blades borrows much in the way of look and style from Kaizo's Jipangu, while bending the story of Dejima just enough so a decent plot doesn't strike up a national incident.

The game will put you in control of one of two protagonists: the strong-willed samurai, Gokurakumaru, or the nubile projectile-wielder, Yuri. Gokurakumaru will have seven main weapons at his disposal, all of which are bladed. From the razor-sharp, albeit unwieldy, katana to the precision-based tachi, Gokurakumaru's weapons equip him for the task at hand. With her trusty bow and deadly accurate shurikens, Yuri is no slouch either. Gokurakumaru and Yuri have been sent to the island to investigate a religious uprising, which has claimed the lives of the previous investigators the government has sent to the island. Thus 7 Blades has a Resident Evil-style plot, minus the zombies, but is based upon real-life events.

Composed of equal parts 3D action and cinematic storytelling, 7 Blades will use a variety of visual gameplay elements to bring the experience home. First, the viewpoint of each scene will vary depending on the skills required at that particular moment. If Gokurakumaru needs to stave off an oncoming horde of enemy warriors, you'll use a Nightmare Creatures-style viewpoint to slash them to ribbons. However, if stealth is required or you need to make use of projectile weaponry, you may end up seeing things through Gokurakumaru's or Yuri's eyes. All of this is being implemented with two things in mind: eye-popping visuals and highly interactive gameplay. Balancing more on the side of Metal Gear Solid in the way of character interaction, 7 Blades thankfully doesn't set out to be a 12-hour FMV fest.

Wrapping it all together are the game's visuals, which, even at this early stage, are shaping up to be nothing short of impressive. Everything in the environment is fair game: Trees can be slashed, rooftops may be leapt upon, and blood explodes from enemies just as you'd expect after a run-in with 3 feet of sharpened steel. Japanese PS2 owners will get their taste of 7 Blades this winter, while US gamers will have to wait patiently until later in 2001. 7 Blades looks like it just might be the shot in the arm Konami has been waiting for. 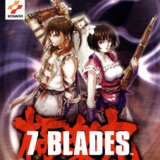