3DO's up-and-coming High Heat Baseball 2000 sports simulation has cranked out the results of the 1999 major league season and come to the conclusion that the New York Yankees will once again win the World Series, this time over the Houston Astros.

Also according to 3DO, the original version of High Heat Baseball predicted the Yankees would win last year, as well as Mark McGwire securing the new home run record.

"High Heat Baseball 2000 is an amazing game, and we are very passionate about it being real baseball," said Trip Hawkins, chairman and CEO of 3DO. "Last year one of the game reviewers complained because in High Heat Baseball the Yankees kept winning the Series and Mark McGwire hit 71 home runs. If it hadn't been for that umpire taking a homer away from Big Mac, we'd have been right on the money."

The new version will feature pitch guessing, infinite pitch locations, new and classic stadiums, career mode functionality (recruiting from the minor leagues with three tiers), team-management modes, an advanced player editor, and multiplayer games over a LAN or the Internet.

High Heat Baseball 2000, developed by Team .366, is expected to ship in March, while a PlayStation version is due this summer. 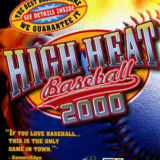