The upcoming motorcycle combat game will appear on the Xbox, PS2, and GameCube.

Though we already saw some of the game at , 3DO has now officially announced Jacked, its motorcycle combat racing game for the Xbox, PS2, and GameCube. Jacked will be an over-the-top racing game in which players run races and try to reach the finish line first but can attack their competitors by beating them with bottles or golf clubs or can attempt to run them off the road into hazards like fire pits and car crushers.

Jacked is scheduled for release on all three platforms in 2003. For more information about the game, check our previous coverage linked in the gamespaces on the right. 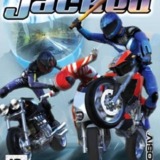