The first three Serious Sam games are coming to the Switch, complete with DLC.

This triple-header will arrive on the Nintendo Eshop on November 17, and supports split-screen deathmatch and co-op for up to four players. It weighs in at 4.1GB, and is published by Devolver Digital, which recently bought developer Croteam.

A first-look trailer for the collection has been released, and it'll look pretty familiar for fans of the series.

The game retails for $30, and includes the expansions The Legend of the Beast and Jewel of the Nile. This will be the first time the Serious Sam franchise has appeared on a Nintendo home console. The Game Boy Advance got its own Serious Sam game, Serious Sam Advance, in 2004; it wasn't anything special.

The fourth game in the Serious Sam franchise, Serious Sam 4: Planet Badass, released earlier this year on PC and Stadia. 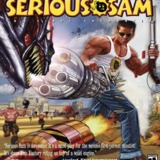