2K Games now has something in common with maligned German director Uwe Boll, but the publisher doesn't seem to mind. The New York-based company today announced that it has acquired the publishing rights to Dungeon Siege, the Gas Powered Games role-playing series serving as the source material for Boll's upcoming film, In the Name of the King: A Dungeon Siege Tale.

Dungeon Siege II: Broken World will open up new realms for fans of the series this summer on the PC. The expansion begins where Dungeon Siege II left off and includes a new campaign, a new race, and a multiclass character development system. Gas Powered Games will be developing this first expansion for the second Dungeon Siege game.

The franchise makes its portable debut on Sony's PSP with Dungeon Siege: Throne of Agony. Scheduled to hit stores in the fall, Throne of Agony will include a brand-new single-player campaign as well as support for competitive or cooperative ad hoc wireless multiplayer modes. The game is being developed by SuperVillain Studios, which formed in 2004 and is headquartered in Costa Mesa, California.

No rating or pricing information has been revealed for either game. For more details on the franchise, crawl through the dungeons of GameSpot's previous coverage of Dungeon Siege II. 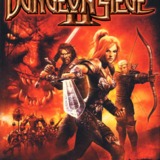