The action and suspense of TV's 24 seem so ripe for video game adaptation that it's a wonder nobody has already made a game starring Kiefer Sutherland's hard-nosed counterterrorist operative Jack Bauer. That won't be true for much longer, though, as Sony has just announced development of a 24 game scheduled for release in the fourth quarter. In development at SCE's Cambridge studio (maker of Primal and Ghosthunter), 24: The Game looks set to deliver the same tension and intrigue as its popular TV counterpart.

How can we say this? Sony has released a making-of video hosted by Sutherland himself, detailing some of the story and gameplay elements of the game. Since this video isn't available for public consumption yet, it's a good thing you have us to write about it. Like the series, 24: The Game will cover 24 hectic hours in Bauer's life, and the day in question will be set between the second and third seasons. In the video, Sutherland says the game's storyline will address a number of unanswered questions from the series. Who was behind the failed attempt on President Palmer's life, and who ran the country while Palmer recovered? Why did Kim Bauer begin working in the CTU? How did Bauer and Chase Edmunds come to work together? Presumably, these questions will be addressed throughout the course of the game.

24: The Game will apparently play out predominantly as a third-person shooter, and you'll be able to take control of Bauer and other agents as you unravel the machinations of evildoers and attempt to save the day. The gameplay will indeed be set against a 24-hour clock, though how this will affect the progression of the game has yet to be revealed. In addition to the third-person scenes, we saw some high-speed vehicular action in the video, as well as a scene that depicted Bauer interrogating a suspect in his uniquely up-close-and-personal style. An onscreen meter in this scene seems to indicate that the interrogation gameplay will come in the form of a minigame of sorts. Sony hasn't revealed any specifics of the gameplay yet, but if SCE Cambridge's pedigree is any indication, the game will likely be built on solid gameplay footing.

The creative forces that drive 24 will purportedly have a strong influence on the video game. The series' creators are said to be working closely with SCE Cambridge on all aspects of the game's design, from the between-season storyline to nuts-and-bolts elements such as the gritty look of the environments. 24's principal cast will also contribute their voices and likenesses to the game; we saw realistic polygonal versions of Sutherland, Elisha Cuthbert, and others that effectively called to mind their real-life counterparts. Even the aural backdrop will be consistent with fans' expectations, since series composer Sean Callery is working on the soundtrack.

As it stands right now, 24: The Game is slotted for a release in the fourth quarter--in Europe. No official details have been announced pertaining to a US release, although since 24 is a consistently high-rated show in America, failure to bring the game stateside would indicate a masochistic streak on Sony's part. Either way, 24: The Game should provide an entertainingly interactive way to experience the tense action thriller, and the game's storyline, penned by one of the show's screenwriters, should be especially intriguing for diehard 24 fans. We'll bring you more on 24: The Game in the coming months. 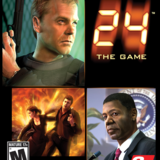