007: NightFire announced for the GBA

Electronic Arts announces that it will release an all-new James Bond adventure for the GBA this spring. First screens inside.

Electronic Arts has today announced that it will release James Bond 007: NightFire for the Game Boy Advance this spring. The first-person action game, which is in development at JV Games, features an all-new adventure that will see players visiting locations all over the world including the Austrian Alps, a Japanese skyscraper, an island in the South Pacific, and a zero-gravity space station.

Pierce Brosnan's image will be used for the James Bond character in the game, and his main adversary will be an evil criminal mastermind named Raphael Drake. Other characters in the game will include Zoe Nightshade--who previously appeared in EA's James Bond 007 in Agent Under Fire--and a number of other familiar faces, although no other names have been released at this time.

There will be nine missions in the game, each requiring a mixture of stealth and action and giving players ample opportunity to put Q-lab gadgets to good use. We'll bring you more information on James Bond 007: NightFire as soon as it becomes available. 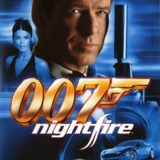