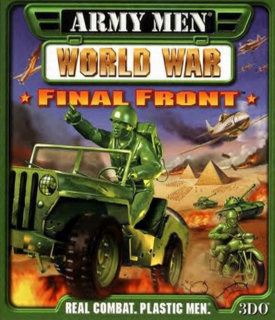 An Army Men game that you can actually enjoy. It has gameplay, story and good controls. Enlist now!

User Rating: 8 | Army Men: Lock 'n' Load PS
By tyzwain | Review Date: September 11, 2007
Well Army Men, not exactly a game genre that mixes with the word 'quality'. But me being a life long fan of Army Men (for some bizzare reason I found them to be fun, especially with my mate, about 6 years ago). Since then I have defended the Army Men franchise against onslaught of critics calling it another bad game.

However with Army Men: Lock and Load it offers something new to the franchise. It has a decent single player, good controls and decent multiplayer. With the introduction of vehicles, it makes this game worth having.

As mentioned before I have played through the whole series of Army Men (which I deserve a medal for), and this one stuck out from the rest. It didn't have the in-your-face storyline of Sarge's Heroes, but it quietly went about showing how a decent Army Men game should be.

If you love Toy Commander, then buy this! Its a must, it mixes nostalgia with the realisation that your childhood fantasy of toy soldiers is brought to life on the Playstation. It's a short, but sweet game that will have you playing for hours.
Load Comments (0)