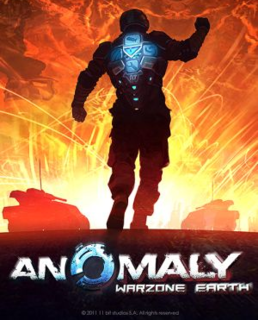 A fresh take on tower defense that is just plain fun.

User Rating: 8.5 | Anomaly: Warzone Earth PC
By SerOlmy | Review Date: July 30, 2011
Picked this up on the recent Steam sale, but I had been wanting to play it since downloading the demo a few months ago. This is a great game, one of the best indi games out there in my opinion, right up there with Torchlight and Braid.

So, if you haven't already heard, this game is reverse tower defense. More precisely, you are controlling the mobile units and your enemies are stationary tower defenses. You control a "commander" unit, which can move freely and deploy a variety of tactical devices and you guide a convoy by selection it's path from a tactical map. This is done by flipping directional indicators at any given intersection. The objective being to make it through the level with the most surviving units and increase points by taking out towers. So it is a balance between making sure your convoy survives and racking up kills.

It sounds simple, but once you get a few levels in it gets quite hectic. Multiple types of towers and clustered placement as well as a few surprises force you to think on your toes. Especially at higher difficulties since you have a limited amount of each power-ups. My one complaint is that difficulty is somewhat uneven. There is a steep ramp-up between missions 5 and 7, but some of the later missions are much easier.

You eventually get to chose from a selection of 6 different types of units, which you can mix and match any way you chose (provided you have the finds) in a convoy of 6 vehicles. Funds to upgrade and buy vehicles are rewarded for taking out towers and collecting resources.

All these aspects combine to create some genuinely fun gameplay. You have to think on your toes in terms of changing your route to maximize gains and survival and how you deploy your tactical abilities to the greatest effect. There are 14 story missions - mainly getting to a safe point, with a few escort and seek-and-destroy missions thrown in. There are also a couple interesting boss battles. If you include the 3 unlockable wave-type missions you have about 7-8 hours of gameplay, more if you replay missions for medals/points.

Conclusion:
Given that you can pick this game up on Steam for $10 ($5 if you get it on sale) that is a lot of bang for your buck. I found the gameplay very enjoyable, it had a story that was actually interesting and made sense (a rarity these days), plus a decent amount of replay value. You should definitely pick this one up if you enjoy tower defense, RTS or just good games in general.
Load Comments (0)