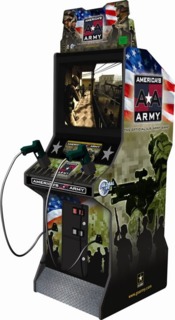 User Rating: 9.1 | America's Army PC
By BarbedBuffalo | Review Date: July 31, 2006
This game is perfectly fine, there are no strings attached.

somebody wrote that you shouldn't put your real information in when you sign up... WHAT INFORMATION!

and they also said the army will recruit you in a draft....

the graphics are great, the scenery is breathtaking.

the guns are accurate, heck it has the most accurate Machine Guns i ever used in a FPS since Counter Strike.

its realistic to a certain extent. If guns got Jamed as much as they do in this game, they wouldn't use them in the army.... mine jam at LEAST once a round.... i doubt it happens that frequently for anybody else... but it kind of makes the game a bit more thrilling, at least if you run into an enemy and realize your gun is jammed, and run out of the way and live to tell about it.

servers i been on so far have been newbie friendly,
i can't speak for some other servers.......

the m16 looks cool when its reloading. I feel wierd for saying that but i like watching guns reload in FPSs and the shotgun in The Suffering :)

I wouldn't say the extencive training courses and book work before you start the game make it anymore realistic than any other army game...
because every other Army game out there has training before it. some people just choose not to do it... think about it. Americas Army just choose to drag it out and assume it makes it more realistic.

The Drill Sargent... I think hes a bit to nice... i think they should have made the drill sargent a bit more realistic and make him a complete ass, that cusses like a sailor and makes you feel like crap... THEN i could REALLY get into it. but he talks like,

"Hello soldier, please walk over to the table and pick up your ammunition"
when he should have been like,

"OK YOU PIECE OF SH** PICK UP THAT GUN AND MOVE YOUR STUPID A** OVER TO THAT GOD D*MN FIELD YOU SQUIRMY LITTLE MAGGOT !"

i woulda been like hellz yeah! but that was so unrealistic. Watch the movie Full Metal Jacket... Then you will see what a real drill sargent would be like...

But other than that the game was great!

and its completely free to download the game client, recommend go on filefront and get the full client off it. unless they have it here on gamespot... i got it off filefront :P